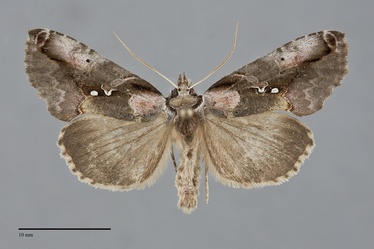 Eosphoropteryx thyatyroides is a beautiful and distinctive medium-sized moth (FW length 16 - 18 mm) that flies in forests throughout our region during the summer. It has a silver stigma and pastel pink base on a smoothly mottled gray forewing. The forewing has a slightly elongated apex and a flange at the anal angle that is reminiscent of the genera Habrosyne and Pseudothyatira in the family Thyatiridae. The forewing ground color is gray, slightly lighter at the base, distal anterior area, and terminal area. Pink is strongest at the base and lighter on the distal anterior wing. Ill-defined darker brown-gray streaks are present at the base of the costa, on the mid-wing near the costa, and on the anterior distal area curving toward the apex. A black spot is present at the apex. The silver stigma is bipartite with a thin horizontal medial component with that is roughly U-shaped and a round distal spot. The antemedial line is gray, slightly undulating and broadly excurved toward the outer margin.The postmedial line is gray, double with gray filling on the anterior forewing area and pink filling near the trailing margin, very faint anteriorly and more distinct posterior to the cell with a slight zigzag course. The subterminal line is pale, light gray and pink near the apex and light gray elsewhere, irregular in course, approaching the outer margin below the apex. The fringe is gray, black at the apex. The hindwing is gray with a pale pink fringe that is checkered with gray. The head and collar are pale gray with a dark gray margin to the collar. The central thorax is tufted with long gray scales with a slight red-brown tint. The male antenna is filiform.

This species can be identified by its wing shape, silver stigma, and pink base. The most similar species are members of the family Thyatiridae which lack the silver stigma.

Larva is smooth with only two pairs of abdominal prolegs, and has a series of raised dorsal humps down the back.  The color is green with white and black lateral slashes.  It is illustrated by Lafontaine & Poole (1991).

This species is usually uncommon to rare. It has a disjunct distribution in moist forest habitats and meadows of eastern North America and the Pacific Northwest.  It is primarily found in undisturbed riparian zones along forest streams, but also occurs in moist mountain meadows with columbines.  This species is considered to be management sensitive and requires undisturbed riparian habitats and moist meadows.

This species is most widespread in eastern North America where it occurs from southern Canada south to Tennessee and western North Carolina. It occurs across boreal Canada to our region. It has also been found in northern Utah near the localities where it occurs in Idaho.

This species is a foodplant specialist feeding on meadow-rue (Thalictrum spp.) and columbines (Aquilegia spp.) in the Ranunculaceae.

This species is single brooded and the adults fly during July and August. They are nocturnal and come to lights.