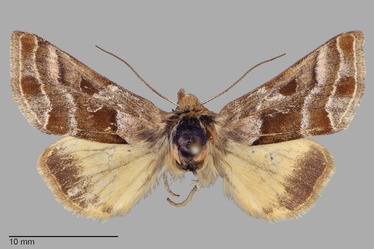 Euchalcia borealis is an extremely rarely collected moth that is only known from two specimens from northern British Columbia. It is a medium-sized species (FW length 16 mm) with a banded brown forewing and yellow hindwing with a dark marginal band. The forewing has a pointed apex. The color of the forewing base, costa, and terminal area are light brown-gray, lightest at the base. The rest of the median area including the cell between the spots, the subterminal area, and patches in the terminal area near the apex and on the mid-wing are dark brown. The antemedial line is pale, evident below the cell where it is nearly transversely-oriented but turned toward the base on the trailing margin. The postmedial line is slightly oblique from anterolateral to posteromedial, with a slight angle at the lower cell. The subterminal line is pale gray, smoothly undulating. The terminal line is pale. The fringe is light gray-tan. The orbicular and reniform spots are thin, pale, filled with the adjacent light brown-gray. The hindwing is light yellow with slight gray basal suffusion. A diffuse gray marginal band is incomplete near the anal angle. The head and thorax are covered with long loose scales, tan. The male is unknown.

No other northern species has a banded brown forewing and yellow and brown hindwing.

This species has been collected in boreal forest and alpine tundra.

This species has been found at two sites in northern British Columbia, the type locality in the northwestern part of the province and the top of Pink Mountain near the Alaska Highway.

This species has not been collected outside of British Columbia.

The adults are diurnal and nocturnal. The female holotype was collected on the flowers of Heracleum lanatum (Apiaceae). The other specimen was collected at light (J. Troubridge personal communication).