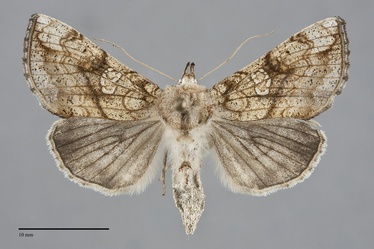 Polychrysia esmeralda is a medium-sized (FW length 15–18 mm), pale, polished brass-colored moth that flies in east of the Continental Divide in British Columbia during the summer. It has a large blotchy white-rimmed spot comprised of fused orbicular and suborbicular spots. The forewing is fairly broad and has a slight flange at the anal angle in some specimens. The ground color is light yellow with a distinct light gold or brass sheen. It is strongly powdered with black scales. The terminal area and anterior subterminal area are light blue-gray, also with a sheen. The veins are brown, except ground color on the costa. The basal, antemedial, and postmedial lines are brown, double, filled with the ground color. The basal line is evident on the costa. The antemedial line is looped far lateral to near the orbicular spot near the costa, then less strongly excurved from the cell to the trailing margin. The postmedial line is directed lateral from its origin on the costa, turned sharply toward the base at the anterior cell, and then smoothly scalloped and nearly straight to the trailing margin. The median line is powdery dark brown, strongly concave toward the base across the cell, acutely turned toward the base on the cubital vein, and parallel to the adjacent oblique postmedial line to the trailing margin. The subterminal line is brown, zigzag, diffuse and relatively faint except for a dark segment from the costa to vein M1 that extends as a brown "dash" to the postmedial line near the vein. The terminal is thin and brown. The fringe is gray with diffuse gray checkering on the veins. The orbicular and suborbicular spots are fused into one large spot ringed by a series of white spots rimmed by brown. The spot is traversed by the brown veins and is the yellow ground color centrally. The reniform spot is a dark brown line at the end of the cell, barely distinct against the adjacent brown median line. A black spot is present at the anterior distal cell. The hindwing is light gray-brown with smoky gray suffusion and a brassy sheen. The veins and thin terminal are dark. The hindwing fringe is white with a yellow base and weak gray median checkering. The palpi are very long and flattened, reaching over the top of the head. The thorax is strongly tufted, and the tegulae are flange-like with lateral extension resembling a victorian ruff collar (Lafontaine & Poole 1991). Additional tufts are present on the abdomen. The male antenna is filiform.

This species can by identified by its pale shiny yellow forewing, the large white median area spot, and the unique characters of the palpae and tegulae that are shared with Polychrysia morigera. This species is brown and does not occur in eastern British Columbia.

Polychrysia esmeralda is found in forests, open parklands, and prairies with larkspurs (Delphinium spp.), its foodplant.

This species is Holarctic and occurs in central and eastern Eurasia in the Old World. The New World range extends from Alaska, Yukon Territory, and Northwest Territories to southern Alberta, Saskatchewan and southwestern Manitoba.

This species is a foodplant specialist feeding on larkspurs (Delphinium spp.) in the Ranunculaceae.

Adults are single brooded and fly in July in western Alberta. It also occurs in August in parts of its range.