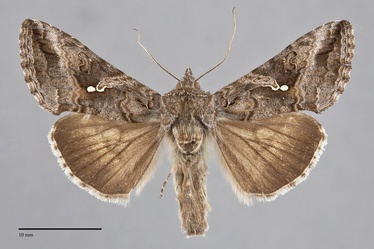 Rachiplusia ou is a fairly large member of the subfamily Plusiinae (FW length 18 - 20 mm) that has only been found in western Montana in the Pacific Northwest. It has a mottled gray forewing with a white stigma. The forewing apex is slightly pointed and there is a slight flange at the anal angle. The color is mottled gray with a distinct luster on the darker parts of the forewing, especially on the distal wing. The color varies slightly across the wing, with gray on most of the posterior wing and costa, light brown in the median area near the distal stigma, darker blackish gray in the central median area extending to the costa between the spots, and on the anterior two-thirds of the distal wing in the subterminal and terminal areas. A short irregular black basal dash is present. The whitish silver stigma is fused or divided into basal and distal parts. The basal portion is squiggly U-shaped, open anteromedially, while the distal part is round. The basal, antemedial, and postmedial lines are gray, double, with tan filling. The basal line is visible on the anterior area of the forewing. The antemedial line is evident posterior to the cell and us sinuous and slightly excurved. The wavy postmedial line is drawn sharply toward the base on the costa, is bent sharply toward the base below the costa, and courses obliquely toward the base across the forewing to the trailing margin. The subterminal line is mildly irregular, including near the apex, and is roughly parallel to the postmedial line. It is preceded by long black lines between the veins opposite the cell. The terminal line is blue-gray with dark spots between the veins. The fringe is moderately checkered with gray and dark gray. The orbicular spot is pale gray filled with a thin dark line and central pale gray. It is located anterior to the open part of the basal stigma, and is tilted with the anterior aspect toward the base. The costa adjacent to the spot is similar light gray color. The reniform spot is dark gray surrounding a thin lighter tan line, kidney-shaped, with a strong lateral indentation. It is filled with the ground color and darker gray in the lower third. The hindwing is warm gray-brown with darker gray toward the outer margin, dark veins, and a dark terminal line. The fringe is pale with weak pale yellow and gray checkering basally. The head and thorax are gray with a tan base and faint barring on the collar. A tuft of gray scales protrudes anteriorly from the frons. Loose tufts of long scales are present on the posterior median thorax. Additional tufts are present on the dorsal abdomen. The male antenna is filiform.

This species should only be considered as a possibility in the far eastern part of the Northwest. It resembles Autographa californica, one of our most common moths, and can be difficult to separate from it by superficial appearance. In general R. ou is less mottled than A. californica and has a slight purple cast, more blue-gray in A. californica. The postmedial line of R. ou is smoother, especially near the fold where the line of A. californica is jagged and toothed toward the base. The lateral stigma of R. ou is often a round spot separated from the basal portion of the stigma; in A. californica the stigma is almost always fused into a single mark and the lateral portion is elongated like a sideways comma rather than a circle. Under magnification, the tuft of scales on the frons of R. ou can be used to confirm the identity since this feature is lacking in Autographa. Rachiplusia ou could potentially also be mistaken for Trichoplusia ni, another common species. Trichoplusia ni is mottled dull gray without the smooth sheen of R. ou, and males of T. ni have tufts of long reddish scales on the side of the abdomen that all other native species in the subfamily Plusiinae lack.

This species is common and widely distributed across the southern half of North America in weedy, disturbed habitats, and tends to migrate northward in late summer.  No breeding populations are known in the Pacific Northwest, but strays may appear along the eastern edge of this region.

Rachiplusia ou has been found in southwestern Montana (Lafontaine & Poole 1991).

This species is fairly widespread in North America to the east and south of our region. It occurs as far north as southern Canada in the East and Midwest, Colorado and central Montana in the western Great Plains, and central California near the Pacific Coast. The range extends south to Ecuador.

This species is a foodplant generalist feeding on a wide diversity of herbaceous plants.

Adults are quite vagile and migratory, and may disperse for several hundred miles. They occur throughout the year in the southern part of the range. The most likely time to find this species in the Northwest is in late summer and early fall. It is a nocturnal species that comes to lights.