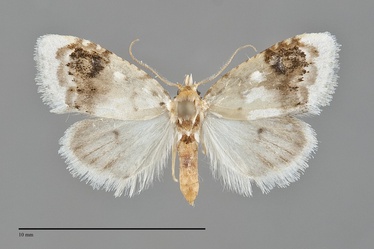 Nola cilicoides is a very small (FW length 8–9 mm) white and brown-gray moth with rounded forewings that has been found in southeast British Columbia, Idaho, and eastern Washington in our region. The forewings are pure white with a patch of gray brown from the mid-wing to the subterminal line. Metallic black scales are present in the anterior part of this patch, fill the diffuse reniform spot, and form the postmedial line. The basal and antemedial lines are gray brown. The orbicular post is a small gray dot. The hindwing is white basally and gray brown distally, and has a white fringe. The palpi are moderately long. The head and thorax are white. The male antenna is filiform with long fasciculations that appears nearly bipectinate under magnification.

This species is easily recognized by its small size and rounded white forewing with a large dark gray patch and metallic scales in the discal spot region. It is generally similar to Eublemma minima, a member of the family Erebidae. They can be distinguished by locality since E. minima is restricted to southwestern Oregon in the Northwest.

This species is widely distributed in forest habitats across Canada, extending westward to the northern Rocky Mountain region.

Nola cilicoides has been collected in southeastern British Columbia, eastern Washington near Spokane, and south-eastern Idaho. It is probably more widely distributed in Idaho and western Montana which are relatively poorly sampled.

This species is more widely distributed in eastern North America where it occurs from Nova Scotia to northern Florida along the Atlantic Coast west to Arkansas. Nola cilicoides has been collected commonly in central Alberta.

The life history of N. cilicoides is reported from Connecticut by Wagner (Journal of the Lepidopterists' Society 63:48–51). It feeds on loosestrife (Lysimachia ciliata (Primulaceae)) and have an unusual feeding behavior that might allow them to avoid this plant's chemical defenses. The young larva bore into the stem of the plant to pith it and then feeds on leaves distal to the pithed segment.  The cocoons are adorned with strips of bark from the adjacent plant.

Nola cilicoides flies during the summer. It has been collected from mid-June to early August in the Pacific Northwest. It is nocturnal and comes to lights.