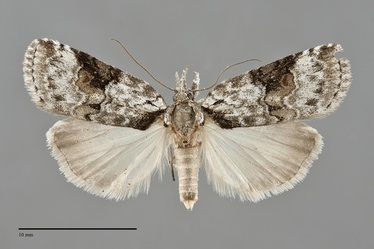 Nycteola frididana is a small moth (FW length 12–14 mm) that occurs in forests during spring and early summer. It has a rectangular forewing shape, variable silver gray, medium gray, or dark smoky gray color and variable pattern of dark spots and sinuous transverse lines. The base of forewing is broad due to expansion of the proximal costa which gives the wing a rectangular shape that is typical of the genus Nycteola. The ground color is variable, most often light to medium dark ash-gray, but mottled whitish gray and melanic smoky brownish gray forms are relatively common. The basal area is gray to black, extending a short distance lateral on the posterior margin to form a "mustache" that extends away from the body in spread specimens but is hard to see in unmounted ones. The costa and cell are darker gray in the median area, and in some specimens the apex is similar. The proximal radial vein is black. The basal, antemedial, and postmedial lines are dark gray, the latter two lines double with filling of the gray ground color. The basal line is slanted across the costa toward the outer margin, often only visible anterior to the radial vein. The antemedial line is sinuous with strongest convex-outward segment above the posterior margin, nearly transverse in orientation. The median line is absent. The postmedial line is irregular, oriented nearly perpendicular to the wing, drawn focally toward the base on the costa and more broadly in the fold. The subterminal line is pale gray, diffuse, nearly continuous. It is preceded by a series of ill-defined triangular gray spots. The terminal line is dark gray, interrupted at the veins. The fringe is gray. The orbicular spot is a small gray shade or black line. The discal spot is a small dark gray or rust-brown triangle surrounded by a thin halo of the ground color. The claviform spot is variable, absent or a small to long pointed black triangle. The hindwing is whitish gray, slightly darker gray toward the margin, with a thin dark terminal line. The head and thorax are ash gray, smoky brown-gray in melanic specimens, often with paired spots on the central thorax and a rusty brown patch on the posterior portion. The palpi are long with medio-laterally flattened anteriorly-directed distal segments. The male antenna is filiform.

This species can usually be identified by the combination of rectangular wing shape, gray to dark brown-black color, and the dark "mustache" mark on the base and adjacent trailing margin. It is slightly larger than Nycteola frigidana and Nycteola columbiana which both lack the "mustache." Melanic specimens are most easily identified since this form does not occur in the other Nycteola species. Specimens in which the basal mark is faint are best identified by dissection as described below.

This species is common and widely distributed in moist forest habitats and in riparian habitats along creeks and rivers throughout much of western North America, including in the Pacific Northwest. It is the most common Nycteola in our area.

Nycteola cinereana is widespread in the Northwest at least as far north as central British Columbia. It occurs on both sides of the Cascades, but is absent from dry steppe east of the mountains. It does not appear to occur in southeastern Oregon or southern Idaho.

The range of specimens examined by Fletcher (1959) range from Manitoba and British Columbia in the north to Baker County, California, Nevada, Utah, and Colorado. The range extends east to Nova Scotia through southern Canada.

This species is a foodplant specialist feeding on Salicaceae including both willows (Salix spp.) and cottonwoods (Populus spp.).

The adults have a fairly long flight season but are most commonly collected during spring and early summer. Our Pacific Northwest records span late March to October, with most specimens from late April to mid-June. The phenogram of N. cinereana has a broader single peak during early summer than those of the other two Northwest Nycteola species which are bimodal with spring and late summer peaks. Nycteola cinereana is nocturnal and comes to lights.