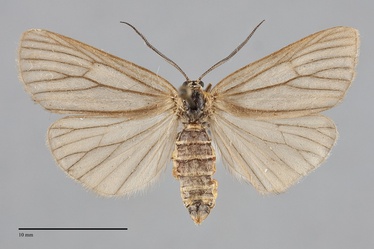 Phryganidia californica is a plain, day-flying, prominent moth found in forests of western Oregon in our region. It is moderate-sized (FW length 15–16 mm.) with uniform plain pale grayish tan forewings and a lighter pale yellow area distal to the end of the cell in males, lacking all markings other than dark veins. The long dark antennae are bipectinate, widest in males.

No other Pacific Northwest moth has plain tan wings marked only on the veins.

Larva is smooth with thin longitudinal stripes of purple, white, black, and green, and is illustrated by Miller & Hammond (2003).

This species is common to abundant in mixed hardwood-conifer forests of the Cascades, Coast Range, and Siskiyou Mountains of western Oregon, primarily at middle to higher elevations in the mountains.

Phryganidia californica is restricted to forests of the central and southern portions of western Oregon in the Pacific Northwest.

This species' range extends south along the Pacific Coast to Baja California in northern Mexico.

This species experiences occasional outbreaks during which the larvae can completely defoliate oaks.