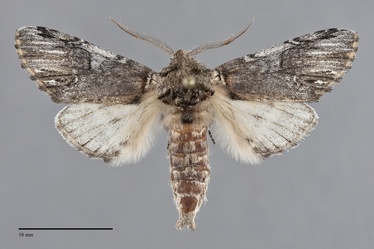 Coelodasys conspecta is a medium-sized prominent moth (FW length 16–18 mm) that flies in dry forests during the summer. Its forewing has a uniform medium-gray base and streaked pale blue-gray and light gray to yellow-white distal area.  Most of the wing is dull powdery gray, lighter on the median costa and on the distal area.  The basal area is very pale.  The distal costa is streaked with black, and a series of black and white dashes are present in the terminal area near the fold.  Several of the distal veins are also dark, adding to the streaked look near the outer margin.  The basal, antemedial, and postmedial lines are black, double, filled with lighter gray.  The basal line is straight and is followed by a dark shade.  The antemedial line is most evident on the costa.  The postmedial line is scalloped, nearly straight across the wing except angled toward the base on the costa.  The discal spot is a thin transverse black line, usually without an adjacent pale area.  The male hindwing is grayish off-white with a light suffusion of gray scales, darkest near the anal angle, with gray veins and faint median and marginal lines.  The female hindwing is medium gray with darker markings.  The thorax is dark gray with black tufts and ridges on the posterior portion.  The male antenna is bipectinate white that of the female is simple.

Coelodasys conspecta has until now been considered to be a western subspecies of C. unicornis (Hodges et al. 1983; Lafontaine & Schmidt 2010).  We treat it as a distinct species because of consistent differences in appearance and ecological preferences between these moths in the Pacific Northwest.

This species is widely distributed in moist canyons and riparian zones east of the Cascades at lower elevations, but sometimes occurs in mixed hardwood-conifer forests at higher elevations in the mountains.

Coelodasys conspecta is found along the western margin of the Columbia Basin in Washington.  In Oregon it has been found in the eastern and southern portion of the state.

The global range of this species is uncertain due to confusion with Coelodasys unicornis.  Its type locality is Yosemite Park, California.

No specific foodplant records are presently available for this species, but it probably feeds on various hardwoods based on closely related species.

Adults have been collected from late May through July.  It is a nocturnal species that comes to light.