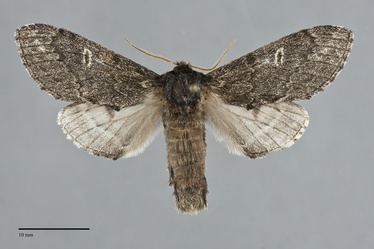 Notodonta torva is a large (FW length 21–23 mm) powdery dull dark gray moth  that occurs in British Columbia during the summer. Its forewings have a white discal spot with a central dark bar and a flange along the trailing margin, and it has light gray hindwings.  The forewing outer margin is weakly scalloped and a small black-tipped flange arises from the inner third of the trailing margin.  The color is uniform powdery dark gray, slightly lighter gray near the apex.  The dark gray antemedial and postmedial lines are scalloped on the veins and are accompanied by pale gray on the sides outside of the median area.  The subterminal line is a series of faint dark spots between the veins.  The fringe is gray at the base with a weakly checkered pale and dark gray edge.  The discal spot is the most conspicuous mark on the forewing.  It is an upright pale oval spot containing a vertical dark gray bar. The hindwing is white dusted with gray, darkest at the anal angle.  The discal spot and postmedial line are darker gray, with a pale band distal to the line.  The thorax is dull charcoal gray and the abdomen is tan to gray-brown.  The male antenna is bipectinate and that of the female is simple.

This species can be identified by its dull gray forewing color, bar-like dark central reniform surrounded by a light "halo," and the presence of a small flange along the posterior margin.  It is most similar to Heterocampa lunata found only in southeastern Idaho in our area.  This species has a wide bipectinate male antenna, often has tan on the thorax and forewing, and lacks the characters of the reniform that are found in N. torva.

The larva is smooth, brown with white stripe along the side, and has prominent fin-like thoracic humps and a caudal hump. It is depicted by Miller et al. (2018).

This is a northern species that is widely distributed in boreal forests across Canada, extending to montane forests in the northern Rocky Mountains.

This species has only been found in British Columbia in the Pacific Northwest, extending north to the Peace River along the eastern border of the province and to Burns Lake in the north-central portion.

Notodonta torva is found in boreal North America from the Atlantic Coast to British Columbia, extending from Alberta to Labrador and New York.  It occurs furthest south in the central United States, reaching Illinois and Oklahoma.

Forbes (1948) gives poplar (Populus spp.) in the Salicaceae as the foodplant.  No hostplant records are currently available for the Pacific Northwest.

Adults are nocturnal and come to light.  The Pacific Northwest records are from June to early September.  It is found in June and July in the East, possibly with two broods (Forbes 1948).