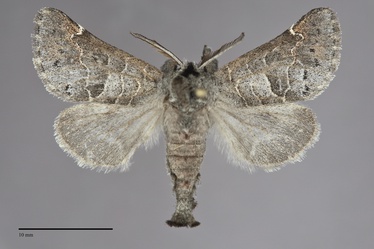 Clostera paraphora is a relatively large Clostera (FW length 15–18 mm) with powdery-gray forewings that is limited to south-eastern Idaho in the Pacific Northwest. The forewing has sinuous light ochre to white transverse lines and the subterminal line is broken into a series of indistinct black spots. The forewing also has a slightly concave anterior margin, a slightly rounded apex, and a rounded anal angle. It is powdery slightly bluish gray with lighter blue-gray on the posterior two-thirds and darker smoky gray near the costa. The basal, antemedial, medial line posterior to the cell, and postmedial lines are the most prominent forewing markings, mostly ochreous yellow bordered by slightly darker gray. The basal line has a tooth directed lateral on the cubital vein. The antemedial line is nearly transverse, slightly undulating. The medial line is S-shaped and slanted so that the posterior margin is joined to the postmedial line at the trailing margin. The postmedial line is lightest, nearly white at the costa, drawn sharply toward the outer margin on the radial veins, then undulating and oblique toward the base to meet the medial line at the trailing margin. The subterminal line is a series of offset indistinct black spots between the veins. The forewing fringe is concolorous with the terminal area. The forewing spots are obsolete; a dark smudge at the reniform spot in a few specimens. The hindwing is even gray without dark markings. The male antenna is bipectinate. The head and thorax are darker gray than the forewing.

This species could be confused with Clostera "apicalis" (a complex of two species: C. apicalis and C. ornata) and Clostera multnoma in its limited range in the Pacific Northwest but tends to be larger than either of these species. In addition, Clostera paraphora lacks brown tones on the forewing, appearing steely blue-gray rather than brownish gray, and lacks entirely red-brown  adjacent to the anterior postmedial line. The latter is a prominent feature of C. "apicalis" and is present to a lesser extent in C. multnoma. The subterminal line of C. paraphora is more uneven than in either of the other species.

The larva is gray with darker gray strips and short, yellow scoli or tubercles. It is depicted by Miller et al. (2018)

This moth has only been found in transition zone conifer forest near aspen groves in the Pacific Northwest.

Clostera paraphora has the most limited distribution of any Pacific Northwest Clostera. It has only been found in the Rocky Mountains of south-eastern corner of Idaho.

This species occurs in the southern portion of the Rocky Mountains. It has been collected in eastern Arizona, New Mexico, and Colorado outside of our region. It probably reaches its northern range limit in southern Idaho.

The larvae feed on woody shrubs and trees in the Salicaceae.

Adults of C. paraphora are on the wing during June and July. They are nocturnal and come to lights. As with other prominent moths, it does not feed as an adult.