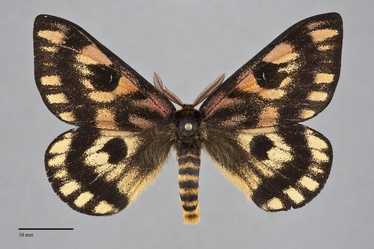 Hemileuca eglanterina is a large, orange and black, day-flying moth that can be mistaken for a butterfly when in flight. It is a very large moth (FW length 32–36 mm; wingspan 6.0–6.8 cm). The forewing varies from orange to rose-pink or purplish while the hindwing is lighter yellow or orange. Both wings are typically heavily marked with thick black antemedial and postmedian lines, very large round or irregular discal spots, and veins. The extent of the black markings is extremely variable, ranging from completely absent to entirely black. The body is dark, with orange and black banded abdomen. The antennae are bipectinate, very wide in males.

This species can usually be identified by its very large size and the pattern of bold black markings on an orange ground. Even immaculate specimens are unique. It is only likely to be confused with yellow variants of Hemileuca nuttalli, which lack the orange or pink hues characteristic of H. eglanterina. The shape of its hindwing postmedial line differs in that it is inwardly concave below the cell unlike the entirely convex line of H. eglanterina.

The body is a brownish black with many whorls of orange colored hairs on the dorsal side. Black spines occur dorsally and subdorsally.  Populations west of the Cascades have mostly black larvae, but larvae east of the Cascades have white lateral spots or lines. Early instars are solid black in color.  The larva is illustrated by Miller and Hammond (2003).

This species is common in a variety of open forest and shrubland habitats. They include high elevation montane forests or meadows, mixed hardwood forests at middle elevations, and juniper woodlands throughout the Pacific Northwest, and open grasslands in the Willamette Valley, prairies in the south Puget Sound region, and remnant grasslands near the Strait of Georgia.  Epidemic outbreaks have been observed in the Blue Mountains of northeastern Oregon.

Hemileuca eglanterina is distributed in forested habitats south of southern British Columbia and southwestern Alberta. It is particularly common in the Cascade mountains and the western half of Oregon, becoming less widely distributed further north in western Washington and southwestern British Columbia.  It also occurs in northeastern Washington, northern and central Idaho, and near the Idaho-Wyoming border.  It is associated with larger fault-block mountains in the Basin and Range Ecoregion of southern Oregon but has not been taken within the Idaho portion of this region.

Hemileuca eglanterina is a species of the Rocky Mountain region and Pacific Coast states. Its range extends from southern British Colombia and southwestern Alberta to southern Utah and northern New Mexico in the Rockies and to southern California along the coast. It is absent from most of the Intermountain Region, including southern Idaho and Nevada.

The eggs overwinter and hatch between April and May. Caterpillars emerge in the spring and are generalist feeders on hardwood trees and shrubs, primarily Rosaceae and Ceanothus in the Rhamnaceae.  Populations in Willamette Valley grasslands particularly feed on rose (Rosa spp.) and on hawthorne (Crataegus spp.), those in montane habitats feed on serviceberry (Amelanchier spp.) or cherries (Prunus spp.), and those in juniper woodlands or sagebrush rangelands feed on bitterbrush (Purshia tridentata). Young larvae feed in groups where as older larvae feed alone. Cocoons are made loosely in leaf litter where they overwinter.

Like other Hemileuca species, H. eglanterina is diurnal, and the adults do not feed.  They fly several yards off the ground and resemble butterflies—particularly silverspots (Speyeria spp.), although their bobbing flight and frantic wingbeats identify them as a Hemileuca moth.  Pacific Northwest collection dates extend from early June until early September.  The females lay their eggs in rings on the stems of the host plants.