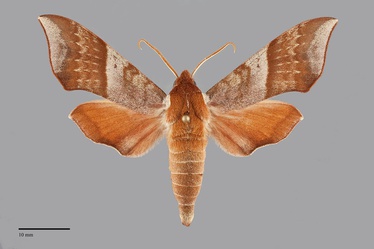 This species is easily identified by its northern distribution, large size, and orange-brown color of both wings.  It is unlikely to be confused with other species in our area.  It should be sought in the northeastern corner of British Columbia.

The larva has both brown and green color morphs with a blue-green caudal horn that points at a somewhat upward angle.  The head and first one to two segments are narrow in comparison to the rest of the body.

The Azalea Sphinx is common and widely distributed in moist hardwood forests throughout much of eastern North America, extending westward to the Rocky Mountain region.  It is mostly encountered along the edge of forest tracks in dappled sunlight where larval host plants are abundant.

Darapsa choerilus was listed as occurring in British Columbia by Hodges (1971), but Tuttle (2007) was unable to confirm the record.  It occurs to extreme northwestern Alberta and is likely to be found in northeastern British Columbia east of the Rocky Mountain Divide.

This species is primarily found in eastern North America in forests east of the Great Plains.  It ranges west to central Texas in the south.  In the north its range extends into southeastern Canada with a band westward from southern Manitoba to extreme northwestern Alberta.

Eggs are laid singly on fresh young leaves of the host plant.  The larvae are solitary feeders that may be evident due to localized defoliation during later instars. Resting larvae cling to the midrib of the host plants leaves.  Common host plants are various hardwood shrubs such as viburnum (Viburnum spp.), azalea (Rhododendron spp.), blueberries (Vaccinium spp.), and possibly honeysuckle (Lonicera).  Pupation in a silk cocoon occurs among debris on the ground.

In the northern part of its range D. choerilus has one generation per year, with a midsummer flight from mid-May to mid-August.  Adults visit flowers for nectar and have been caught or observed on a variety of plants, including Japanese honeysuckle (Lonicera japonica), bladder campion (Silene latifolia), snakeroot (Eupatorium spp.), spiraea (Spiraea spp.) and goldentop (Euthamia spp.).  They are crepuscular and nocturnal and can be caught with bait and light traps.