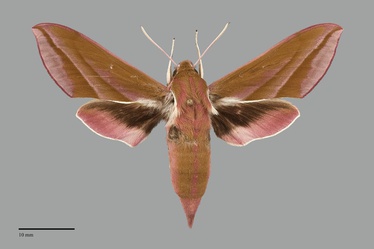 Deilephila elpenor is an attractive olive-green, pink, and black large (FW length 26 mm (n=1)) Eurasian sphinx moth that was discovered recently in the Lower Fraser Valley of British Columbia.  The forewing is typical in shape for the family and is smooth olive to bright green.  The costa, terminal area and fringe, and the oblique straight post medial and subterminal lines are pale to bright pink.  No spots are evident.  The hindwings are bright pink with a black basal area and white fringe.  The head, thorax, and abdomen are olive variably tinted with pink, with white lines on the lateral tegulae.  The pale antenna is club-like.

Larvae can be bright green, olive brown, or brownish-black with a pair of large eyespots on each side, toward the front of the body. The eyespots may be shown more prominently in response to a threat.

The first Pacific Northwest observation of this species was at Pitt Meadows east of Vancouver in southwestern British Columbia.  It is unclear how the species was introduced, but it has clearly become established and has started to spread.  It has been suggested that this moth was released deliberately by an amateur entomologist, but this has not been substantiated.

This is an introduced Palaearctic species.

Larvae typically feed on plants of the family Onagraceae, with fireweed (Epilobium spp.) being the most likely candidate in our region.  Feeding occurs either diurnally or nocturnally with the larvae retreating to the middle of the plant when not feeding.  Pupation occurs in a cocoon of loose silk and debris at the surface of the ground.

It appears that is a single generation per year in North America with a flight period that extends from early June through September.  Adults are active well after dark when they feed on nectar at flowers and copulate.  Females begin oviposition as soon as copulation is finished.