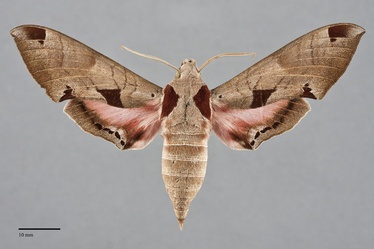 This species can be definitively identified by its very large size, tan color with distinctive geometric dark brown patches on the forewing and each side of the thorax, and pink hindwing.  It is unlikely to be confused with any other species in our area.

Records of this species are most common in southwestern Oregon in our area, although isolated occurrences are documented through the Willamette Valley into south-central Washington.  It appears to be an established resident in the Klamath Mountain Ecoregion (Edna Bottorff personal communication 2011).  It has been collected in northwestern Wyoming near the eastern edge of the Pacific Northwest but has not been found in eastern Idaho or western Montana.

Eumorpha achemon is widespread in North America north of northern Mexico.  It is found across the southern part of the United States, ranging as for north as southern New England in the east, southern Saskatchewan in the Great Plains, and northern Utah in the Rocky Mountain region.  It is absent from most of Nevada but occurs in most of California west of the Sierra Nevada crest.

This species is a foodplant specialist feeding on various members of the Vitaceae including cultivated grapes (Vitis spp.).

Adults are crepuscular and nocturnal and visit flowers for nectar.  They are attracted to lights.  The few Pacific Northwest records are from June and again in August and September.

This species may be a local pest on grape vines in urban areas.