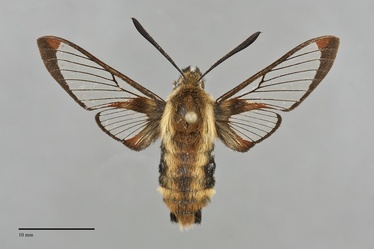 Hemaris diffinis is a predominantly eastern and central North American clearwing sphinx moth that occurs in northeastern British Columbia. It is a small to medium-sized sphinx moth (FW length 12–17 mm) with black and red-brown edged transparent wings with dark veins. The forewing cell is undivided. The head is yellow with a black band across the frons. The thorax is golden-yellow with an olive tint, lighter ochre laterally. The abdomen is black and light yellow. The abdomen pattern is the differentiating feature between this moth and Hemaris thetis and is described in the next paragraph. The legs are black.

This species is easily identified as a member of the genus Hemaris by the clear forewings and bumblebee-like appearance. Hemaris diffinis and H. thetis both differ from Hemaris thysbe in having an undivided forewing cell and black rather than red-brown legs. Hemaris thetis is very similar to H. diffinis and is the common and widespread Hemaris in the Pacific Northwest. According to Schmidt (2009), these species differ consistently in three traits: 1) the anal tuft of scales is solid black or black with some dorsal yellow hairs in H. thetis, not solid yellow centrally as in H. diffinis; 2) the dorsal thorax and basal abdominal segments are even olive in H. thetis, orange-yellow with pale yelllow subdorsal hairs that produce a striped appearance in H. diffinis; and 3) the subdorsal yellow strip does not extend through the fourth abdominal segment in H. thetis but extends through this segment in H. diffinis. Hemaris diffinis is only known from the Peace River region of northeastern British Columbia but might be expected elsewhere near the Continental Divide in western Montana and British Columbia.

The relationship of H. diffinis and H. thetis was recently elucidated by Schmidt (2009).

Hemaris diffinis occurs in a variety of habitats in eastern North America.  It is most likely to occur in parkland and prairie in western Wyoming, Montana, and British Columbia.

This species is widely distributed in the eastern and central portions of North America from the Atlantic Coast to the Rocky Mountains.  It occurs from the Gulf Coast States to southern Canada. The range extends furthest north in the Prairie Provinces.

This moth flies during spring and early summer.  It is diurnal and seeks nectar at flowers, hovering over the flowers while eating.