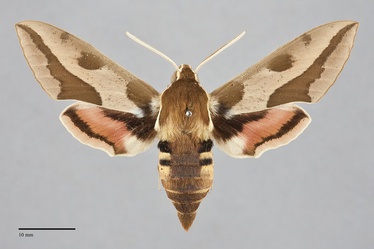 Hyles euphorbiae is an introduced Eurasian sphinx moth that has become established in several locations in North America. It resembles the native Hyles gallii in size and pattern (FW length 29 mm) but has a pale greenish tan to ochre-tan forewing with darker olive-gray or brown-gray areas that form spots at the wing base and anterior wing and a curved stripe between the postmedial and subterminal lines. The hindwing is pale rosy pink, palest near the anal angle, with black stripes at the base and in the submarginal region and a white fringe. The thorax is gray-brown with white stripes along the sides of the head that continue posteriorly along the lateral tegulae. The abdomen is gray-brown with dorsolateral black and light tan stripes on the anterior segments. The antenna is club-like.

This species is only likely to be found in the most eastern part of our region, most likely in western Montana. It can be identified by its large size, simply-patterned yellow-tan and darker forewing, and rose pink and black hindwing. It differs from H. gallii in having a broader greenish tan pale are of the central forewing that reaches the costa, ochre yellow band with minor anterior irregularity in H. gallii.

The larva is smooth, mottled with black and white spots dorsally, and has a bright red head, legs, lateral spots, and a caudal horn.  It is illustrated by Powell & Opler (2009).

This species is widely distributed across Eurasia, and was introduced into western North America as a biological control agent for exotic leafy spurge (Euphorbia esula) in sagebrush rangelands and short-grass prairies.  This species is considered to be management sensitive, and is vulnerable to insecticide spray programs directed against grasshoppers.

A population from eastern Montana is spreading following release in 1974 for biological control of spurges (Euphorbiaceae).  An old record of this species exists for southern Vancouver Island.

This Eurasian species is established in New York and southern Ontario in the East.  Western populations are spreading northward into Canada from central Montana.

This species is a foodplant specialist on exotic leafy spurge (Euphorbia esula) in the Euphorbiaceae, a noxious weed on sagebrush rangelands and dry prairies.

Hyles euphorbiae is multiple-brooded in Europe but appears to be single-brooded in North America.  According to Tuttle (2007) most Nearctic records are from late May and June.

This species was introduced as a biological control on exotic spurges.  Tuttle (2007) reports that the foodplant remains common in the areas where this moth have become established.