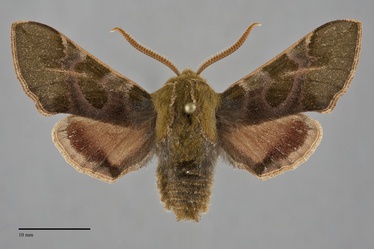 This moth is unmistakable because of its very early flight season, dense covering of green scales, and rosy-red hindwing.

This species was until recently known as Arctonotus lucidus. Rubinoff et al. (2009) showed that this species is a specialized early-season species of Proserpinus.

The synonym Arctonotus lucidus clarki Barnes and Benjamin was described from Pullman, Washington.

The larvae may change considerably with each instar in terms of coloration. One source reported that the first instar was yellowish with black head, was green all over in the second, gained a white stripe in the third, remained green or became darker in the fourth and finally gained a prominent posterior eye spot in the fifth. Another source reported larvae having a background color that was white to cream colored. The caudal horn changes with each instar, decreasing in size to a dark button in the mature larva.

A wide range of elevations are tolerated by this species, ranging from 200–3,500 ft. At lower elevations the preferred habitat is mixed grasslands with oak woodland or chaparral in southwestern Oregon. East of the Cascades, this species primarily inhabits dry, open ponderosa pine forests and juniper woodlands at middle elevations and dry sagebrush steppe at low elevations. It is most common in foothill steppe habitats east of the Cascades, but is rarely collected because of the early flight season.  This species is considered to be management sensitive in forests, and benefits from thinning and burning that maintains an open pine forest or juniper woodland community.

Proserpinus lucidus is found the drier portions of eastern Washington and adjacent western Idaho.  It is found in similar habitat in the Columbia Basin of northern Oregon.  Further south it occurs west of the Cascades in the Siskiyou Mountain region of southwestern Oregon.  It has not been found in dry areas in southeastern Oregon and southern Idaho.

Proserpinus lucidus is only found in California outside our region. It occurs south to the Mexico border but is not found in the eastern part of the state near Nevada or Arizona.

Proserpinus lucidus is a very early season species which is on the wing from mid-January to mid-April.  There is one generation every year. Males are nocturnal and come to light, whereas females are rarely collected and might be sedentary, diurnal, or unattracted to light.  This species does not feed as adults.

This is a foodplant specialist.  Larvae are solitary feeders on the underside of the leaves of Clarkia spp. and evening primrose (Oenothera spp.) in the Onagraceae, and retreat to the base of the plant when not feeding. They are active during the day. Pupation occurs in shallow underground burrows.