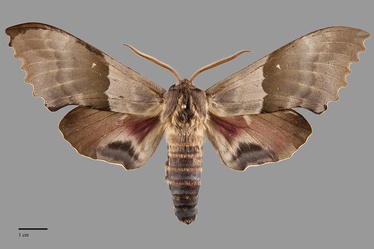 This species can be identified easily by its northerly distribution, very large size, olive-gray forewing with scalloped outer margin, and claret hindwing with black and blue at the anal angle. However, it is similar to Pachysphinx occidentalis, on average a slightly larger and paler species than P. modesta that flies south of northern Washington in our area. These species can be identified by distribution except in the zone of overlap. The most reliable differentiating feature is the shape of the hindwing black marks. They are parallel and nearly equal in strength in P. occidentalis, not asymmetric with a larger anterior triangle as in P. modesta. The larvae of the two species have different skin and caudal horn lengths in the last instars (Hodges 1971; Tuttle 2007).

The larva is granulose blue-green with white lateral stripes, and lacks a caudal horn in the last instar.  It is illustrated by Powell & Opler (2009).

This species is mostly limited to moist forests of mixed hardwoods and conifers at middle elevations in the Rocky Mountain region where quaking aspen and cottonwoods are common.  It occurs in riparian areas in steppe in the northern Columbia Basin.

This species is widespread in North America. It is found throughout most of the East, except on the Atlantic Coast south of Maryland and the southern parts of Louisiana and Texas. Its range extends west to western Utah, eastern Oregon, and southeastern British Columbia where it overlaps that of P. occidentalis in the Rocky Mountain region. The northern limits of its distribution are reached in southern Labrador, James Bay of Hudson Bay, and northern Alberta.

This species is a foodplant specialist feeding on Salicaceae including both willows (Salix spp.) and cottonwoods (Populus spp.), but appears to particularly favor cottonwoods and quaking aspen (P. tremuloides).

Adults are single-brooded and can be fairly common from late May until late July in our region.  The are nocturnal and come to lights.  They do not feed as adults.