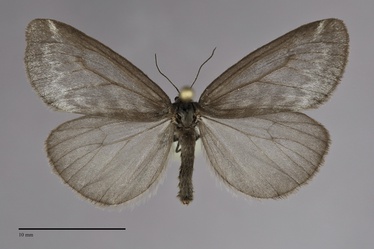 Dodia albertae is a dull gray, small to medium-sized (FW length 14–16 mm) tiger moth with broad, translucent wings and a slender body. The forewing is translucent gray with scattered light gray scales on the outer wing. The light gray subterminal line is waved, diffuse, and forms a prominent contrasting light mark at the anterior margin. The hindwing is uniform darker gray with slightly darker veins and marginal band. The head and body are also dark gray. The antennae are filiform.

Dodia species are more likely to be confused with inchworm moths (Geometridae) than other members of the superfamily Noctuoidea. They are most reliably identified as tiger moths by the wing venation and features of the location of the ear (metathoracic tympanum). Dodia tarandus is a similar species that flies in bogs in northern Alberta and Yukon Territory. It might also occur in British Columbia. It is also translucent gray, but differs from D. albertae in having extensive slightly lighter gray patches on the wing.

This species has a Holarctic distribution. In Eurasia it occurs from northern Mongolia to eastern Magadanskaya Oblast. In North America it occurs from Alaska east to eastern Alberta and central Northwest Territory. It is replace by the recently described species Dodia tarandus further east.

The early stages of D. albertae are unknown.

Adults occur from early June until mid-July. They fly both in the day and night.