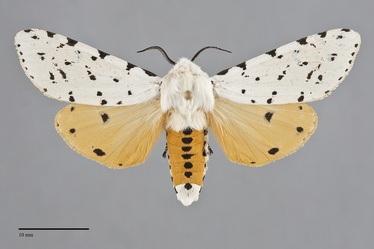 Estigmene acrea, the saltmarsh caterpillar, is a distinctive, medium to large (FW length 23 - 25 mm) black-spotted pure white and bright yellow moth. The forewing is white with multiple black spots along all the transverse lines, heaviest at the costa. The hindwing is bright yellow with a black discal spot and series of marginal spots. The head and dorsal thorax are white, while the abdomen is black-spotted bright yellow with a white tip. The ventral wings, thorax, and abdomen are yellow. The black antennae are bipectinate, wider in males than females.

E. acrea is unlikely to be confused with other moths in our area. All other tiger moths with white forewings also have white hindwings, unlike E. acrea.

Larva is densely covered with long hairs, and is quite variable in color ranging from mottled shades of yellow and brown to black.

This species is widely distributed across North America, but usually does not occur west of the Cascades.  In the Pacific Northwest, it occurs east of the Cascades at low elevations in moist meadows of riparian zones along creeks, and in disturbed grasslands of agricultural and urban areas.

E. acrea is found from central British Columbia south through Washington and Oregon as far west as the Cascade mountains.

This species is widely distributed in North America from the Atlantic coast to California. It ranges north as far as central Alberta and British Columbia in the west.

This species feeds on a wide diversity of herbaceous plants, and is sometimes a pest in agricultural areas.

E. acrea has a long flight season from late spring to early fall. Adults do not feed. It is nocturnal and comes to light.