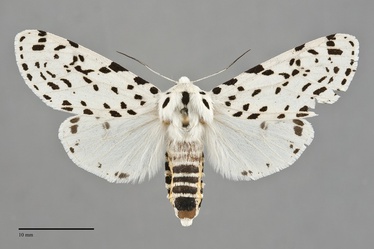 Hypercompe permaculata is a heavily spotted white moth. It is medium-sized (FW length 17 - 22 mm) and the ground color of the head, thorax, and both wings is pure white. All usual forewing lines are present as series of black spots between the veins. The discal spot is also comprised of black spots. The hindwing is less heavily marked with dark gray spots, usually only the discal spot and marginal band are present. The collar, tegulae, and central thorax are also marked with black. The abdomen is white with yellow sides, heavily spotted with black to the extent that some individuals appear to be transversely striped black and white. The simple antennae are white basally and black distally.

This species could potentially be confused with heavily spotted individuals of Spilosoma virginica, but this species has a pure white thorax without black markings. Estigmene acrea has the most similar forewing pattern to H. permaculata but its hindwings are yellow.

This species is widely distributed in moist meadows throughout the Rocky Mountain region at lower elevations, and barely enters the Pacific Northwest.

Hypercompe permaculata has a limited distribution in the Pacific Northwest. It has only been found in extreme southeastern British Columbia and western Montana.

This is found in western North America. It occurs widely in the Rocky Mountain region and adjacent western Great Plains from southern Alberta to the Mexico border. It extends west across Utah, Arizona, and Nevada to eastern California.

This species feeds on general herbaceous vegetation, particularly on Caryophyllaceae and Polygonaceae.

The few records of this moth from our region are from July. It is nocturnal and comes to lights.