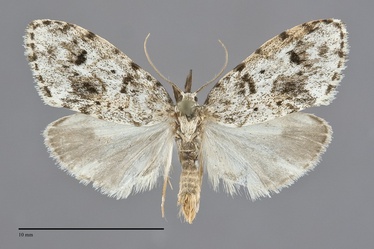 Clemensia umbrata is a small (FW length 10–11 mm), pale, oval-winged tiger moth found in moist forests in our region. The forewing is pale white and smudgy brown-gray peppered with darker scales. The transverse lines are pale gray-brown marked with darker dots, these most evident as black dots on the costa, on the antemedial line in the cell, and on the postmedial line in the fold. The entire terminal line at the base of the fringe is dotted. The orbicular spot is a small black dot and the reniform spot is a thin black slightly irregular triangle.  The hindwing is whitish extensively smudged with light gray.

This species is most likely to be confused with micro moths (multiple families that are not included on this site) but can be recognized by wing shape and pattern. Meganola minuscula is similar in size and general pattern, but it has complete black transverse lines. It also occurs earlier in the spring before the flight of Clemensia umbrata.

Larva has short sparse hairs, is cryptically mottled green and black with a thin middorsal white line, and is illustrated by Miller and Hammond (2003).

This species is widely distributed across North America in moist forests.  In the Pacific Northwest, it is common to abundant in coastal rainforests, oak woodlands, and in mixed hardwood forests at low elevations west of the Cascades, but appears to be rare in the Rocky Mountain region.

This species is widespread in the Pacific Northwest and has been collected most frequently in southern British Columbia, northern Idaho, and the western parts of Oregon and Washington. The most northerly records are from Cedarvale in west-central British Columbia and the Peace River District in the north-east part of the province.

Clemensia albata is widely distributed in eastern North America. It ranges west across boreal Canada to southeastern British Columbia. It has a narrow range along the Pacific Coast south Monterey Bay in west-central California.

This species is a specialist on tree lichens, particularly those that grow on hardwood trees such as Oregon white oak (Quercus garryana). McCabe (1981) reports that the larvae from New York state feed on algae and refuse lichens.

Adults occur in the summer from late June until early September, but are most common in July. They are nocturnal and come to light.