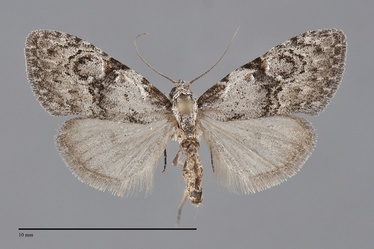 Meganola minuscula is a very small moth (FW length 8–10 mm) that flies near oaks during the spring. It has a whitish gray forewing marked with streaky gray dots on the lines and often with a dark triangle on the mid-costa. The forewing has an elongated apex and is ovate in shape. The color is light gray, often whitish, with faint longitudinal streaking due to slightly lighter veins. Dark gray areas are present along the costa from the base to the antemedial line and at the median line. The lines are gray. The antemedial line is reduced to a few spots on the veins. The median line is gray, often dark in Northwest population, diffuse, producing a dark band across the wing or a gray spot on or near the costa. The postmedial line is double, usually complete, thickest on the veins, widely excurved around the reniform spot and bent perpendicular to the trailing margin at the lower spot. The subterminal line is a series of indistinct gray spots. The terminal line is gray, indistinct. The fringe is gray with weak checkering. The orbicular spot is a small gray dot. The reniform spot is gray filled with the lighter ground color, incomplete and difficult to identify as separate from the median and postmedial lines. No claviform spot is present. The hindwing is very light gray with a faint discal spot and slightly darker margin and fringe. The head and thorax are powdery light gray. The male antenna is bipectinate.

This species can usually be identified by its association with oaks, spring flight period, small size, oval forewing, and pale gray color with pattern consisting of gray patches and spots. It is most likely to be confused with Nola minna, which is more uniform gray and has consistent brown-black marks on the base of the costa that are lacking in M. minuscula. Clemensia albata, a member of the tribe Arctiini in the Erebidae is generally similar in size, wing-shape, and color. It has a black discal spot, black spotted terminal line, and smudged gray mark on the lower outer wing, unlike N. minuscula.

Meganola minuscula is found in oak forests throughout North America. It is common to abundant in Pacific Northwest oak woodlands and mixed hardwood forests with oaks at low elevations.

This species is most widespread in the East where it is found from southern Canada to the Gulf Coast. The distribution extends across the southern parts of the United States to California, then north near the Pacific Coast to our region.

This species is reported to feed on both oaks (Quercus spp.) in the Fagaceae and willows (Salix spp.) in the Salicaceae in eastern North America.  However in the Pacific Northwest, it appears to be largely restricted to feeding on Oregon white oak (Q. garryana).

The flight season of M. minuscula is spring. It has been collected from late March to early June in our region. This species is nocturnal and comes to lights.