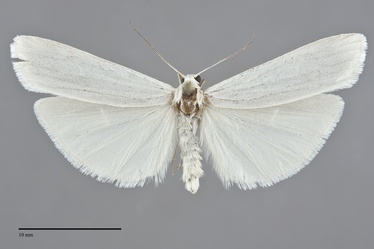 Crambidia casta is a small to medium-sized, white-winged moth (FW length 14–17 mm) that flies in a variety of dry habitats during late summer and fall. The pure white forewings are long and narrow with a satiny sheen. The broader and roughly triangular hindwings are duller white, appearing slightly dusky. The dorsal hind wings near the anterior margin and the ventral forewings are darker smoky gray. The head and abdomen are white.

This moth can be identified by its white color, relatively small size, and the combination of elongate forewing and broader triangular hindwing. It is only likely to be confused with Crambidia cephalica, a similar species that is restricted to southern Idaho in the Northwest. However, C. cephalica has a yellow head, not white as in C. casta.

This species is widely distributed across North America, although it tends to occupy forest habitats in eastern hardwood forests.  However in the Pacific Northwest, it is primarily found in juniper woodlands and sagebrush rangelands at low elevations east of the Cascades.  In more normal dry years, this species is usually uncommon or rare.  However during particularly cold, wet years, epidemic outbreaks of this species may occur in normally dry rangelands across central Oregon.  These outbreaks may result from unusually good growth by the lichen foodplants during wet years.

Crambidia casta is widely distributed in steppe and dry forest habitats in southern British Columbia, Idaho, and Oregon and Washington east of the Cascade Mountains. It is rare west of the Cascades where it has only been found at a couple of locations in western Oregon and on Fidalgo Island, Skagit County, Washington.

This species is widely distributed in North America. In the east it is reported as occurring from North Carolina and Kentucky north to Nova Scotia by Covell. In the west it occurs in the Rocky Mountains states south to central Arizona and New Mexico outside of the Pacific Northwest.

This species is a foodplant specialist on lichens, and may particularly favor lichens growing on junipers or sagebrush east of the Cascades.

Adults fly from late summer until early October. They are nocturnal and come to light. The wings are rolled around the body when the moth is at rest. When doing so, it becomes very thin and has the appearance of a stick or bleached grass stem.