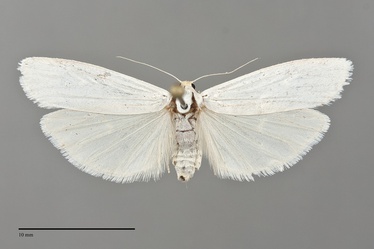 Crambidia cephalica is a small white moth (FW length 11–15 mm) that flies in southeastern Idaho during late summer. It has a yellow head and its forewing is long and narrow. Its color is white with no trace of the ordinary lines or spots. The hindwing is broader, evenly yellow off-white. The top of the head is light yellow, while the thorax is white.

This moth can be identified by its southeastern Idaho distribution, nearly entirely white color, and the yellow head. It is only likely to be confused with Crambidia casta, which is more common and widespread in our area, and has a white head, unlike the yellow head of C. cephalica. C. cephalica is slightly smaller, although there is overlap in the range of sizes of these moths, and is less dusky gray on the underside of the wings. All other white moths in the Pacific Northwest are much larger than these species and have much broader forewings.

This species is found in steppe and open forest habitat.  It has been found in bunchgrass steppe in the Central Basin and Range Ecoregion in the Pacific Northwest.

The distribution of this moth forms a band across the central and southern United States from eastern Nevada, Utah, and Arizona to southern Ohio, the border between Tennessee and North Carolina, and northern Georgia.  Occasional reports from further north appear to be misidentifications of C. casta.

This moth is usually on the wing during late summer. It has been collected from late July until late August in the Northwest.