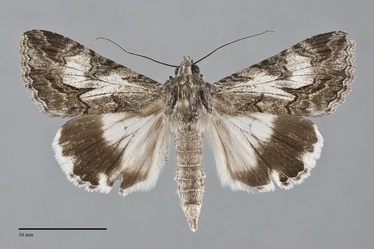 Melipotis jucunda is a common medium to large species (FW length 17–23 mm) with a finely-streaked gray forewing and black and white hindwings. The forewing ground color is medium gray, with fine longitudinal streaking due to dark veins, exaggeration of the horizontal segments of the lines, and black dashes between the veins on the distal portion. The lines and spots are thin and black, usually inconspicuous in uniformly gray specimens, but accentuated in individuals with pale whitish gray median area and black along the posterior margin and distal forewing area. The hindwing is pure white to pale gray with dark veins, thin discal spot, and wide marginal band with two white spots at the base of the white fringe. A segment of the fringe has a dark inner line. The head and thorax are gray. The antennae are simple, ciliate in males.

This species can be identified from all other species in our area by the finely streaked gray forewing and black and white hindwing with two white spots in the marginal band.

This species is common and widely distributed across North America including the Pacific Northwest.  It occurs in riparian habitats along creeks and rivers at low elevations both east and west of the Cascades, but is also common in mixed hardwood-conifer forests at higher elevations in the mountains.  It is definitely a permanent breeding resident throughout the year in the Pacific Northwest.

Melipotis jucunda has been found in a large portion of North America, from the Mexico border to southern Canada in the West and Great Plains region and to New Jersey in the East.

The literature is confused regarding larval foodplants.  It is reported to feed on woody shrubs and trees of the legume family (Fabaceae) in the southern United States, but may use willows (Salix spp.) in the more northern regions.  In the Pacific Northwest, it might use either willows (Salicaceae) or herbaceous legumes.

Adults have a long flight season and have been collected from late April through September in the Pacific Northwest, most commonly in July. It is nocturnal and comes to light.

This species is reported to be migratory by Powell & Opler (2009), and flies northward from the southern United States each year.  However in the Pacific Northwest, it is definitely a year-round resident with over-wintering larvae.