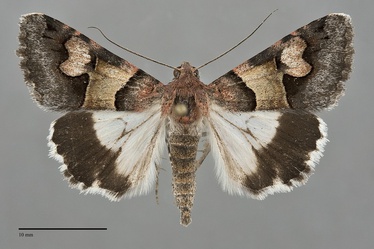 Drasteria pallescens is a distinctive pale Drasteria with white ground color of the hindwings. It is a medium-sized moth (FW length 16 - 19 mm). The forewing appears banded with different colors between the lines. The area basal to the antemedial line is gray-brown to rosy brown, the median area is pale tan, whitish distal to the reniform spot, the postmedial area is nearly black, and the terminal area is blue-gray. The median line is red-brown, while the other lines are black. As in other members of the genus, the area between the reniform spot and the adjacent postmedian line is pale and gives the appearance that the reniform spot is very large with a scalloped lateral margin. The hindwing is white with a broad black marginal band containing a small white spot near the anal angle at the base of the white fringe. The head and thorax are light brownish gray. The antennae are ciliate in males and simple in females.

This is our only Drasteria species with a white base to the hindwing. In this respect it is similar to our Melipotis species. Its range only overlaps that of Melipotis jucunda which has a predominantly gray forewing which appears to be longitudinally streaked unlike the transversely banded with of D. pallescens.

This species is common and widely distributed on open prairies and sagebrush steppe throughout much of the Great Plains and Rocky Mountain regions, extending westward across the southern portion of the Great Basin.  It barely enters the southern part of the Pacific Northwest.

Drasteria pallescens is only known from the Snake River Plain in southeastern Idaho in our region.

This species is found on the Great Plains east of the Rocky Mountains. The range extends west to Baja California across the southern portion of the Great Basin to west Texas.

The adults fly during summer, although Powell & Opler (2009) report that the species is double brooded. The few Idaho records are from June to early September. It is nocturnal and come to light.