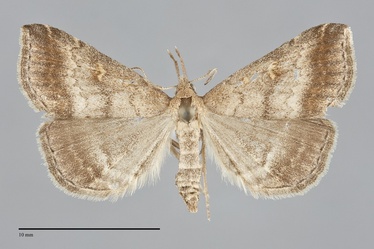 Tetanolita palligera is a small (FW length 10 - 12 mm) deltoid moth with light tan-gray and dark gray forewings and hindwings with darker gray margins and yellow reniform spots on the forewings. The ground color of both wings are similar light gray. Both distal wings are darker brownish gray, darkest near the subterminal line. The forewing antemedial and postmedial lines are thin. The postmedial line is scalloped and oriented nearly straight across the wing. The median line is dark gray similar to the distal wing, thin and diffuse, and surround the reniform spot . The subterminal line is light ochre to reddish, thin and scalloped. The thin reniform spot is light ochre. The hindwing is similar to the forewing, with dark lines against a gray ground on the basal portion and light subterminal line against darker gray toward the margin. The male antenna is ciliate with a tuft of scales at the junction of the proximal third and distal portion; that of the female is simple.

This species can be differentiated from other deltoid moths by the combination of the similar light gray forewings and hindwings, darker near the margin, with irregular light subterminal lines. Bleptina caradrinalis is the most similar species. Some specimens of this species have an unmistakable a black reniform spot. Those that lack black spots resemble T. palligera but have an even pale subterminal line on the forewing, not irregular as in T. palligera, and its hindwings are less similar to the forewings than those of T. palligera.

This species is most common in dry open grasslands, oak woodlands, and mixed hardwood-conifer forests of southwest Oregon.

This species is found in dry steppe habitat in eastern Washington and Oregon, and in forests in southwestern Oregon.

This species is found in western North America.

This species is a detritivore feeding on dead leaves.

The few Pacific Northwest records of this species are from May, July, and August. It is nocturnal and comes to light.