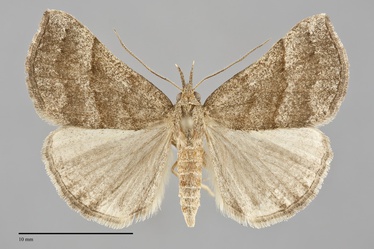 Hypena atomaria differs from our other Hypena species in color and wing pattern. It is a small moth (FW length 13–14 mm) with a broad wing with a slight concave outer margin near the apex, convex otherwise. The ground color is brownish gray heavily dusted with medium brown. The antemedial, postmedial, and subterminal lines have similar smooth shape and brown color, and each is followed by lighter wing color. These lines are evenly spaced across the wing, dividing it into four segments of similar width. The spots are absent. The hindwing is luteous white, dusted with brown near the margin. Like other members of the subfamily Hypeninae the palpi are long. The male antenna is ciliate, without knob-like thickening.

This species can be identified by the gray-brown triangular forewing with evenly spaced lines.

No information is presently available regarding habitats of this species.

A single record for this species from Bellingham, Washington might be an error. It could potentially be found in eastern British Columbia, but there are no records of this moth from Alberta at the University of Alberta Strickland Museum.

This is an eastern North American moth. Forbes (1954) gives the range from New York west to the Dakotas and Alberta.

No information is presently available regarding foodplants of this species.

Adults fly in June in the East and Midwest.