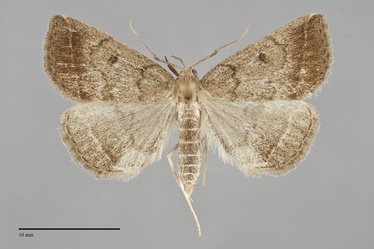 This is our only member of a genus with several morphological peculiarities, including long labial palpi, a knot-like thickening with small claw-like structures at the proximal third of the male antenna, and several adaptations of the male foreleg including tufts and sensory pockets. The forewings of this small moth (FW length 11–13 mm) are triangular in shape and powdery dull tan-gray, darkest from medial to the subterminal line to the outer margin. The thin gray antemedial and postmedial lines are irregular in shape and outwardly convex. The subterminal line is straight and has thin dark inner and light outer components, the light portion is most conspicuous in most specimens against the dark outer area of the wing. The reniform spot is small and dark, with a triangular shape, apex medial. The hindwing is slightly lighter than the forewing with very faint discal spot and darker postmedial line. A pale subterminal line is similar to that of the forewing but is angled inward near the anal angle. The male antenna is ciliate with a knot-like thickening at the junction of the proximal third and distal portions; that of the female is simple.

This species can be told from similar size and color moths in the family Erebidae by the straight pale subterminal line on the forewing.

This moth has been known previously as Z. lutalba (Smith)and Z. bryanti Barnesin the West. These names are now used as subspecies of Z. jacchusalis, following Lafontaine and Honey (2009) and Lafontaine and Schmidt (2013). Subspecies Z. j. lutalba is dull gray brown. It occurs in eastern and central British Columbia in our region. The other PNW subspecies, Z. j. bryanti, is warmer brown and its terminal forwing is slightly darker in most individuals.

Zanclognatha jacchusalis is found in mesic forests throughout our region. It occurs widely in British Columbia. South of Canada it is found in northern Washington and west of the Cascade crest in Oregon and Washington.

Zanclognatha jacchusalis is distributed widely in North America. It occurs from southern Canada to the Gulf Coast States and eastern Texas in the East. The northern range extends across the Canadian Prairie Provinces to the Pacific Northwest.

This species is a detritivore feeding on dead leaves.

The adults are on the wing in summer, with Pacific Northwest records from July and August. It is nocturnal and the adults come to lights.