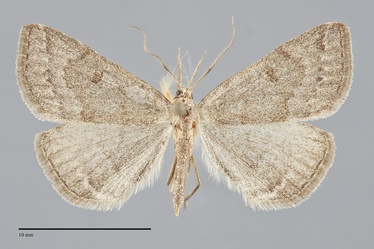 Species in the genus Chytolita have several structural modifications, including long blade-like labial palpi that extend far beyond the head, a small knot-like thickening of the male antenna, and a fan-like scale tuft on the femur of the male foreleg. The forewings of this fairly small moth (FW length 11–14 mm) are triangular in shape and uniform powdery light clay gray. The antemedial and postmedial lines are brownish, smoothly undulating. The median line is a brownish shade near the posterior margin, only evident at the base of the postmedial line in many individuals. The subterminal line is a slightly irregular series of light and dark wedges. The reniform spot is small, similar brown to the lines in most individuals although it is rarely black. The hindwing is slightly lighter than the forewing with an ill-defined dark postmedial line and dark and light subterminal line.

This species can be told from other similar size moths in the subfamily Herminiinae by its powdery clay color, smooth antemedial and postmedial lines, and broken wedge-like subterminal line.

Pacific Northwest populations of this species have been called Chytolita petrealis in the past; however, this name is now considered to be a synonym of C. morbidalis (Crabo et al. 2013).

This species is common to abundant in coastal rainforests at low elevations west of the Cascades, but also extends into mixed hardwood-conifer forests along the west slope of the Cascades.

Chytolita morbidalis is found in mesic forests of southern British Columbia and western Oregon and Washington.

This species is found across boreal North America to the Atlantic Coast where it occurs from Nova Scotia to Virginia and Tennessee.

No information is presently available for this species, but it is probably a detritivore feeding on dead leaves like closely related species of this genus.

The adults appear to be single brooded in our region and are on the wing in early summer. Pacific Northwest records are from June and July. It is a nocturnal species that is attracted to light.