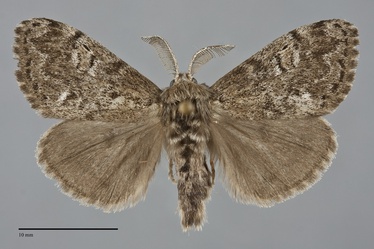 Dasychira species are gray rounded-wing moths that can be identified by their bipectinate antennae and tufts of raised metallic scales on the dorsal posterior thorax and proximal abdominal segments. The males are smaller than the females. Dasychira grisefacta occurs in two distinctive subspecies in the Pacific Northwest. It is a medium-sized moth (FW length 17–20 mm in males; 21 mm in females).

The nominate subspecies Dasychira grisefacta grisefacta has mottled gray to grayish-brown forewings with fairly wide and diffuse dark antemedial, postmedial, subterminal, and terminal lines. The very wavy subterminal line is variable, sometimes appearing pale. The terminal line is usually comprised of a series of fuzzy spots. The reniform spot is fairly large. It is usually incomplete, open at the top and bottom, and is usually surrounded by a small amount of light gray but filled with the ground color. A white subanal spot is fairly prominent. The hindwings are dark gray with a faint discal spot.

The dark subspecies Dasychira grisefacta ella Bryk occurs along the Pacific Coast. Its wings are nearly uniformly brownish dark gray, very dark on the forewing and slightly lighter on the hindwing. The forewing markings are reduced to the white subanal spot and remnants of the pale area around the reniform spot and the subterminal line.

The nominate subspecies can be confused with Dasychira vagans and Dasychira plagiata, although the latter species barely approaches our region in eastern British Columbia. The forewing of D. g. grisefacta tends to be more mottled than either of the other species and has less pale gray along the costa and inside and near the reniform spot. Its postmedial and terminal lines are thick and irregular, thinner and straighter in D. vagans. Dasychira plagiata has a distinct brown color that is lacking in D. g. grisefacta. Subspecies D. grisefacta ella is unlikely to be confused with other species.

Larva is densely covered with tufts of hair including gray lateral tufts and white dorsal tufts, with four very long gray tufts on the back and pairs of laterally projecting black tufts at the head and tail.  It is illustrated by Miller & Hammond (2003).

This species is widely distributed in coniferous forests throughout much of western North America.  It is usually rather uncommon or rare, but local outbreaks have been observed.

This species is found throughout forests of western North America as far east as the Dakotas.

Adults fly from July to August and appears to have a single brood in the Pacific Northwest. Like other members of the subfamily Lymantriinae they do not feed as adults. They are nocturnal and come to lights.

This larvae of this species can cause defoliation of conifers.