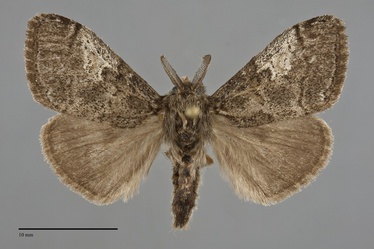 Dasychira species are gray, rounded-wing moths that can be identified by their bipectinate antennae and tufts of raised metallic scales on the dorsal posterior thorax and proximal abdominal segments. The males are smaller than the females. Dasychira vagans is a medium size moth (FW length 14–20 mm in males; 21–24 mm in females).

The western subspecies Dasychira vagans grisea (Barnes & McDunnough) has medium blue-gray ground color finely peppered with black scales. The costal portion of the median area is usually whitish gray, including inside the reniform spot. The antemedial and postmedial lines are dark gray, usually relatively thin and undulating in shape. The subterminal line is either faint or absent. The terminal line is thin and distinct, sometimes broken into a series of short lines. The dark reniform is large, usually incomplete anteriorly and often posteriorly, and is filled with whitish scales. The females are lighter colored than males with more extensive pale areas on the forewing. The hindwings are gray in males, lighter gray to brown-gray in females, with faint discal spots and submarginal bands.

This species is most similar to Dasychira grisefacta grisefacta, with which it occurs east of the Cascade axis. Dasychira vagans is smoother bluer gray with more pale white scales in and around the reniform spot, and its lines are thinner and less diffuse than those of D. g. grisefacta.

Larva is densely covered with tufts of gray and white hairs, with pairs of long, laterally projecting black hair tufts at the head and tail.  It is illustrated by Miller & Hammond (2003).

This species is widely distributed in forests throughout North America.  In the Pacific Northwest, it is found in coastal rainforests, mixed hardwood-conifer forests at higher elevations in the mountains, in oak woodlands and mixed hardwood forests at low elevations west of the Cascades, and in riparian zones east of the Cascades.  It is usually rather uncommon or rare.

In the Pacific Northwest, Dasychira vagans is found in forests throughout our region including west of the Cascades. It does not appear to occur in the dry portions of southern Oregon and Idaho.

Dasychira vagans is widely distributed in North America. It occurs from Newfoundland to southern British Columbia in the north and North Carolina and Utah in the west. The nominate subspecies D. v. vagans is found east of the Rocky Mountains and is more variable than the western subspecies D. v. grisea.

This species is a foodplant generalist feeding primarily on hardwoods such as Aceraceae, Betulaceae, Fagaceae, Salicaceae, and Rosaceae, but particularly favors oaks (Quercus spp.).

This species is single brooded and the adults fly from June through August. Like other members of the subfamily Lymantriinae they do not feed as adults. They are nocturnal and come to lights. Ferguson (1978) notes that this species flies relatively late at night, often not until midnight.