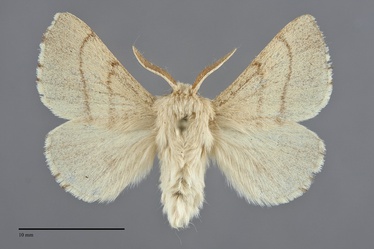 Malacosoma constrictum is a sexually dimorphic species with pale yellow-brown males and reddish brown females with a simple pattern consisting of two forewing lines. As in other Malacosoma species, the males are smaller than the females (FW length 13 mm in males; 17 mm in females) and have stubby, rounded forewings. The males are uniform light yellow-tan marked with smooth, nearly straight brown antemedial and postmedial lines. No spots are present. The hindwings are slightly ligher colored and lack markings. The fringes of both fore- and hindwings are white lightly marked with a few brown dots. The females are powdery reddish brown, slightly darker on the forewing median area. Its forewing lines are dark red-brown, similar in shape to those of the male. The fringes are dark red-brown with white segments in the anterior forewing and mid-hindwing. The head and body match the wings in both sexes. The antennae are bipectinate, wider in males than in females.

All of our Malacosoma species can be recognized by their yellowish or red-brown color and simple pattern of smooth forewing lines. Males of M. constrictum are similar to very light specimens of Malacosoma californicum but have light rather than dark hindwings and lack any hint of darker red-brown in the forewing median area. They also resemble Malcosoma disstria but are usually lighter yellow without a warm tint, warmer orange-brown in M. disstria, and have lighter colored fringes. The females of M. constrictum can resemble light females of M. californicum and dark females of M. disstria but are usually more uniform reddish brown with only slightly darker lines. They are best identified by association with the males.

The larva has long white lateral tufts of hairs, the color is light blue with a dorsal black band. It is illustrated by Miller & Hammond (2003).

Malacosoma constrictum is found in the vicinity of oaks and is therefore most widespread in western Oregon.  It occurs in the southern Puget Lowland ecoregion and on the east side of the southern Cascades in Washington.  It has not been found in association with oaks further north in western Washington or on Vancouver Island.

This species is found in California south of the Pacific Northwest.

This species is a foodplant specialist on oaks (Quercus spp.) in the Fagaceae, and mostly feeds on Oregon white oak (Q. garryana) in western Oregon and southern Washington.  The larvae live communally in silken tents.

This species has similar biology to other Malacosoma species.  The adults do not feed, are nocturnal, and are strongly attracted to lights.  They are on the wing from late May to early August in the Pacific Northwest, peaking in late June and July.