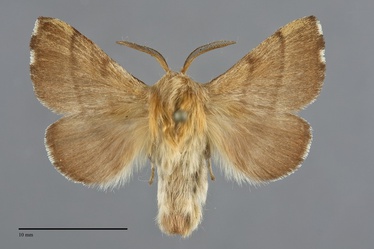 Malacosoma disstria is a common, orange-brown moth that flies in forests throughout the Pacific Northwest during the summer. Round-winged males are smaller than the females (FW length 12–14 mm in males; 17–19 mm in females). The ground color of both fore- and hindwings is even warm yellow-brown to orange-brown, with markings limited to slightly outwardly convex brown antemedial and postmedial lines on the forewing and a diffuse dark medial band on the hindwing. The females tend to be lighter colored than the males and often have a tan median area that is darker than the rest of the forewing. The fringes of both wings are usually darker than the ground color in both sexes except for a few white segments on the anterior half of the forewing. No spots are present on either fore- or hindwing. The head and thorax match the wing color. The antennae are bipectinate, wider in males than in females.

This species is easily recognized as a member of its genus by the uniform brown color and markings limited to smooth forewing lines bordering the median area. It can resemble both other Pacific Northwest Malacosoma species. Males of M. disstria are distinguished from light forms of male M. californicum by the similar color of the fore- and hindwings of M. disstria males. In contrast, the hindwing of M. californicum is darker than the forewing. Males of Malacosoma constrictum are lighter yellow without a warm orange tint and have a similar light-colored fringe. Females of M. disstria can usually be identified by their warm yellow-brown color and dark forewing lines that lack a light outer component. Dark females of M. disstria resemble those of M. constrictum and are best identified by association with males in areas with oak (the foodplant of M. constrictum).

Larva has long yellow lateral hair tufts, the color is blue with orange lateral lines and white dorsal patches. It is illustrated by Miller and Hammond (2003).

This species is widespread in forest habitats throughout the Pacific Northwest. It is particularly common in oak woodlands and mixed hardwood forests west of the Cascades and in quaking aspen forests or riparian habitats east of the Cascades.

Malacosoma disstria is widely distributed in forests in the Pacific Northwest at least as far north as central and northeastern British Columbia. It is absent from the drier regions of southeastern Oregon and southern Idaho, though occasional records exist for the interior of the Columbia Basin in Washington.  This species is less common than M. californicum in the dry interior regions of the Northwest and in south-western Oregon.

This is the most widely distributed Tent Caterpillar in North America. Franclemont (1973) reports that there are records from every state except Arizona and Nevada.

This species is a generalist hardwood feeder, and has been recorded on Ericaceae, Salicaceae, Betulaceae, and Fagaceae.  It particularly favors oaks (Quercus spp.) west of the Cascades, and cottonwoods and quaking aspen (Populus spp.) east of the Cascades.  The larvae do not live in silken tents, but rest communally on branches and tree trunks.

Malacosoma disstria is similar to other Malacosoma species in that the adults do not feed, are nocturnal, and come to lights. They have a strong buzzing flight and bounce and spin on the ground when attracted to lights. Pacific Northwest records are from late May through August although the moth is most commonly found in July.

This species experiences episodic outbreaks during which the larvae can completely denude forests of leaves. It is a recognized pest on many broad leaved trees.