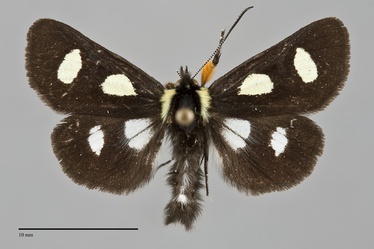 Alypia langtoni is a distinctive day-flying medium-sized (FW length 13 - 14 mm) jet black moth with two large light yellow spots on the forewing. Both sexes have these forewing spots. The hindwings differ between the sexes. The male has two pure white spots, one at the base that is traversed by black veins and one on the mid-wing. The female has a single light yellow spot on the mid-wing. The tibias of the prothoracic and metathoracic legs are bright orange. The head is black with yellow next to the eyes and on the palpi. The thorax is black with yellow tegulae and a yellow patch on the midline collar. The surface of the eye lacks hairs. The male antenna is wider toward the distal end and narrow at the base. Each segment is ringed with black and white, while the thickened distal "club" is black.

This distinctive species can be identified by the distinctive wing pattern and is unlikely to be confused with any other species in our region. Males of this species are similar to Alypia octomaculata which occurs in eastern North America and are often misidentified as this species. The antennal segments of A. octomaculata are black without white rings. Females of A. octomaculata have two white spots on the dorsal hindwing and are easily distinguished from A. langtoni.

Larva is covered with sparse long hairs.  The color is white with transverse orange bands and many small black spots.  It is illustrated by Miller & Hammond (2003).

In the Pacific Northwest, it is found at middle elevations in the Coast Range, the Cascades, and Rocky Mountains in meadows, clear-cuts, roadsides, and in burned areas within the coniferous forest zone.  It has also been found in open areas of mixed hardwood-conifer forest at low elevations west of the Cascades, even in urban areas.

Alypia langtoni is found in mid-elevation forests throughout the Pacific Northwest. It also occurs at low elevations to the west of the Cascade Mountains.

This species is on the wing from spring to mid-summer. Most specimens have been collected in June and July in our region. The adults are strictly diurnal and visit flowers during the day.