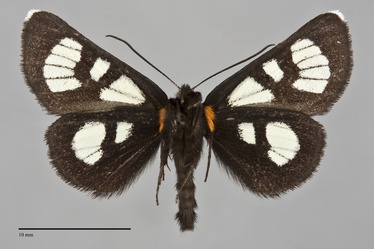 Alypia ridingsii is a distinctive black and pale yellow day-flying small to medium-sized (FW length 12 - 16 mm) moth that flies in sage steppe during the spring. The wings are jet black. The central forewing is uniform light yellow with black bars at the positions of the orbicular and reniform spots and black veins distal to the reniform spot. The apical fringe is pure white, while the rest of the fringe is black. The hindwing is similar, with a black bar-like discal spot and two black veins (M3 and CuA1) extending laterally from the posterior discal spot. The hindwing fringe is black. The head is black. The thorax, except for parts of the collar which are light yellow, is also black. The tibia of the middle leg is orange, while those of the other legs are black. The surface of the eye is covered with fine hairs. The antenna is simple with thickening of the distal portion.

Robert Poole suggests that this species should be placed in a new genus. It differs from other members of Alypia in having hairy eyes and in the position of the clasper of the valve in the male genitalia (see nearctica.com).

This species is widely distributed in open dry habitats throughout much of western North America.  In the Pacific Northwest, it is sporadic and rare on dry native prairies or oak savanna at low elevations west of the Cascades, and in dry, rocky meadows at high elevations in the Cascades. It is most common and widespread in dry canyonlands and open steppe at low to middle elevations east of the Cascades.

Alypia ridingsii is widespread in the dry interior steppe regions of the Pacific Northwest and is found as far north as southern British Columbia. It has been collected in the Columbia Basin where it is most common in the treeless hills at the periphery of the Basin, in southeastern Oregon, and in southern Idaho. It is uncommon west of the Cascades but has been found on southern Vancouver Island, Washington's Olympic Peninsula, and in western Oregon.

This species is widely distributed in the American West, predominantly west of the Continental Divide. It is found throughout California and east to central Colorado and southern Arizona south of the Northwest.

This species is a foodplant specialist feeding on evening primroses (Oenothera spp.) in the Onagraceae.

This species is single-brooded and flies in late spring and early summer. Most records are from May and early June. The adults are diurnal and visit flowers. They fly relatively slowly and deliberately several feet above the steppe. They are relatively easy to net in flight for a noctuid.