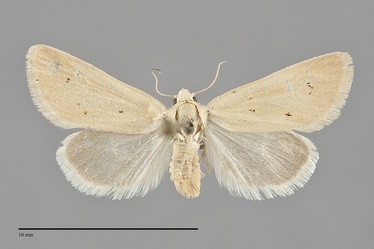 Neogrotella spaldingi is a very small (FW length 8 - 9 mm), light yellow moth that flies in deserts of southeastern Oregon during the summer. It has gray hindwings and uniform-colored forewings. The forewing markings are limited to a few tiny black dots on the veins at the antemedial and postmedial lines. The hindwing is uniform light gray with a white fringe. The head and thorax are yellow like the forewings. The frons bears a complex tubercle with a central horn-like process. The male antenna is filiform.

This species is most likely to be confused with light specimens of Ponometia torticina. Unlike N. spaldingi, P. torticina has a black orbicular spot but lacks black dots on the veins. It also lacks a frontal tubercle.

Little information is presently available regarding habitats of this species in the Pacific Northwest, but it has been found within dry, low elevation sagebrush steppe habitats in southeastern Oregon.

The only known occurrence of N. spaldingi in our area is from extreme southeastern Oregon near the border with Nevada.

Neogrotella spaldingi is found in the Southwest region. South of the Pacific Northwest it occurs in southern California, Nevada, Utah, Arizona, and New Mexico.

Adults fly during the summer and have been collected in August in and near the Pacific Northwest. They are nocturnal and come to lights.