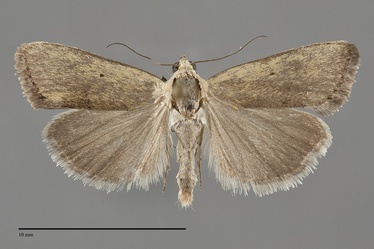 Ponometia tortricina is a very small (FW length 9 - 10 mm) olive-tinted yellow to brownish-gray moth that flies in arid steppe environments during the summer. The markings on its wings are limited to a black dot at the orbicular spot and dark markings at the trailing margin in lighter individuals. The most common color is even olive gray, with a slightly powdery look due to a mixture of light and dark scales. The trailing margin, distal wing, and fringe are often slightly darker gray. Some specimens have a rectangular darker gray patch on the posterior half of the wing between the positions of the postmedial and subterminal lines. The minority of specimens in our area are lighter yellow or ochre. The hindwing is gray with a whitish fringe. The head and thorax match the forewing color. The male antenna is filiform.

Lighter specimens of P. tortricina can be readily identified by the even color and black orbicular spot. Dark specimens are closely similar to Ponometia fumata and cannot be reliably sorted by superficial appearance, although Robert Poole states that P. tortricina has an olive tint that is lacking in P. fumata. The shape of the bursa is different in the females (those of both species are illustrated on nearctica.com), but the males are structurally identical. The relationship of these taxa and Ponometia nigra is in need of further study.

This species is widely distributed in dry grasslands and prairies throughout much of North America.  In the Pacific Northwest, it is locally common but rather sporadic on open sagebrush steppe east of the Cascades.

Ponometia tortricina is found in a large portion of North America with the center of the distribution in the Great Plains and southern Rocky Mountain Region. It is widespread in the Great Plains, occurring from the Mexican border in Texas and New Mexico north to southern Manitoba and central Alberta. Isolated records from the Southeast are shown on the Moth Photographers Group website (Moth Photographers Group). It is common throughout the Four Corner States, but is absent from all but the northern part of Nevada and has not been collected in California.

No information is presently available regarding larval foodplants of this species, but it probably feeds on Asteraceae like other species in the genus.

Ponometia tortricina has a long flight season from late spring to early fall. It has been collected from mid-May to early September, although most records are from June and July. It is nocturnal and comes to lights.