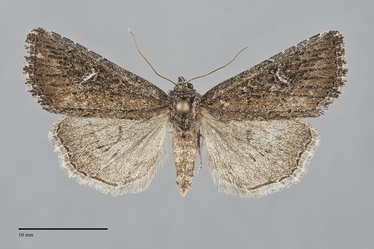 Condica mersa is a dull dark brownish-gray, medium-sized moth (FW length 17–18 mm) that flies in steppe and dry forests in late spring. It has a pattern consisting of pale filling in the lower reniform spots. The forewing has a slightly pointed apex and appears broad. The ground color is dull powdery gray-brown, darker gray on the anterior half basal to the subterminal line, and often lighter in the terminal area following the subterminal line. The veins are dark gray producing a longitudinally streaked appearance. The basal and antemedial lines are absent. The smoothly convex postmedial line is very faint, evident as darker spots on the veins and a subtle transition from darker medial to the line and lighter in the subterminal area. The subterminal line is pale, jagged and toothed on the veins and drawn sharply toward the wing base opposite the cell and in the fold. The terminal line is gray, faint. The fringe dark gray, with faint checkering with brown in some specimens. The orbicular spot is pale brown and round, but barely visible. The reniform spot is kidney-shaped, double, dark gray with the brown ground color between the lines, and central filling of the ground color in the anterior half and whitish gray in the posterior half, appearing mostly as a curved white line against the gray wing. A claviform spot is lacking. The hindwing has a slightly angular outer margin. It is powdery dull brownish gray with a diffuse gray marginal band, discal spot, and veins. A distinct gray terminal line is present. The fringe is slightly lighter than the rest of the hindwing with a thin basal line. The head and thorax are powdery brown-gray with faint transverse barring on the collar. The male antenna is filiform.

This species can be identified by its streaky dark brown-gray forewing with pale filling of the lower reniform spot. The only other species with similar color and pale reniform spot, Properigea niveirena, has distinct forewing lines and flies later in the summer than C. mersa.

This moth was known as Draudtia lunata until recently. The synonymy is credited to Poole (nearctica.com).

This species is moderately common on dry, open sagebrush steppe and in juniper woodlands at low to middle elevations east of the Cascades.

This species occurs in dry rangeland and forest habitats east of the Cascades from southern British Columbia south through Oregon to southern Idaho and northern Nevada.

Condica mersa has only been found at a few sites outside of the Northwest. It is recorded from northeastern California, western Nevada, and southern California on nearctica.com and The Moth Photographers Group web site.

No information is presently available regarding larval foodplants of this species, but rabbitbrush (Chrysothamnus spp.) in the Asteraceae is suspected based upon closely related species.