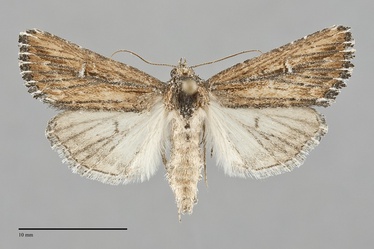 Condica discistriga is a medium-sized (FW length 15 - 18 mm) moth that flies in steppe and dry forests during late spring and summer. It has a longitudinally streaked orange-brown and gray forewing with indistinct spots. The wing has a pointed apex. The ground color is medium-dark orange-brown with the central portion from the mid-cell to the above the fold from the base to the subterminal line as well as the edges of the costal and trailing margins are darker brown-gray from the base to the subterminal line. The terminal area is darker brown, sometimes gray. The veins are gray, darkest on the distal third of the wing, and there are additional black lines as a basal dash and dark streaks in the cell producing a longitudinally streaked appearance. The double antemedial and postmedial lines are evident as spots on the costa; the smoothly convex postmedial line is also evident as dark dots on the veins. The subterminal line is jagged, usually diffuse white, drawn toward the base opposite the cell above veins M3 and in the fold below vein CuA2 and scalloped toward the margin on veins M3, CuA1, and CuA2. The terminal line is thin and dark. The fringe is checkered dark gray and white. The orbicular spot is variably present, small, oval, of the ground color peripherally, and has a small gray dot centrally. The reniform spot is incomplete, usually with the lower half visible, outlined in thin black, and filled with the ground color, black, and a small amount of central pale gray to white scales, often only visible as a pale interruption of the streaked pattern through the cell. The claviform spot is absent. The hindwing is pale brown-gray with scattered dark scales, slightly darker toward the margin, with darker discal spot, veins, and terminal line. The postmedial line is evident as darker spots along the veins and the fringe is paler than the rest of the wing with a thin line through the base. The head and thorax are covered with white-tipped gray scales, appearing mottled gray. The collar has faint transverse barring and a paler gray tip in most specimens. The tegulae are orange-brown with gray margins. The male antenna is filiform.

This species can usually be identified by its orange brown and gray color and streaked pattern. Euxoa pluralis and Rhizagrotis modesta are similar in color and occur in the same steppe habitat as C. discistriga. Euxoa pluralis has well-defined orbicular and reniform spots that are larger than those of C. discistriga. Rhizagrotis modesta has a more uniformly pale hindwing lacking dark veins and terminal line and usually has a complete gray postmedial line on the forewing unlike C. discistriga in which the line is indistinct.

This species is moderately common on dry, open sagebrush steppes and in juniper woodlands at low to middle elevations east of the Cascades, but also occurs in open ponderosa pine forests at middle elevations.

Condica discistriga is found in the dry interior of the Pacific Northwest as far north as south-central British Columbia. It is widespread in the Columbia Basin in Washington and in the southern parts of Oregon and Idaho.

The range of C. discistriga includes much of western North America from the Rocky Mountains west to the Pacific. Most records from outside of our region are from Colorado, Utah, and the northern portions of Arizona and New Mexico. It has also been collected in southwestern Saskatchewan, and northwestern Nevada. It is limited to the extreme eastern and southwestern parts of California.

The only known foodplant for the larva is rabbitbrush (Chrysothamnus spp., Asteraceae) (Crumb 1956).

The adults fly from late spring through the summer and have been collected from early March through August in the Northwest. They are most commonly found in June and July. This species is nocturnal and comes readily to light.