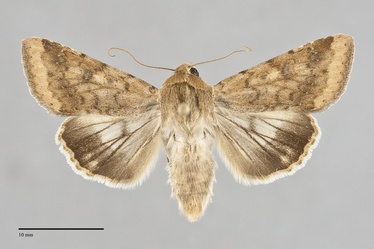 Helicoverpa zea is a medium-sized moth (FW length 16 - 20 mm) that is found in most of the Northwest during late summer and fall. It has a mottled dull ochre-brown to orange-brown forewing with a light terminal area and a pale hindwing with dark veins and dark gray marginal band with light spots near the outer margin. The males are lighter in color than the females and have a green to olive cast, while the darker females are more orange-brown. The forewing is variable mottled with gray to red-brown from the base to the subterminal line, usually strongest in the subterminal area. The lines and outlines of the spots are light gray, sometimes orange-brown in specimens with similar color mottling. The pattern is fairly light, but usually visible. The basal and antemedial lines are irregular. A sinuous median line touches the medial reniform spot. The postmedial line is toothed on the veins, often with dark and light spots on the veins at the tips of the teeth. The subterminal line is pale and slightly irregular, usually with an off-set below the costa, and is preceded by an even light gray shade or series of wedge-shaped spots between the veins. The terminal line is a series of small but distinct black spots between the veins. The fringe is slightly darker than the adjacent terminal area. The orbicular and reniform spots are similar, with a thin outline, peripheral filling of the ground color, and central filling of darker gray. The orbicular spot is round to oval and the reniform spot is kidney-shaped. The claviform spot is variable, absent to faint. The hindwing is pale brownish-yellow off-white with dark gray veins, bar-like discal spot, and wide marginal band containing diffuse spots of the ground color near the outer margin between veins M3, CuA1, and CuA2. The fringe is tricolored with a light orange base, gray median line, and white edge. The head and thorax match the forewing ground. The male antenna is filiform.

This species can usually be recognized by its mottled ochre to dull orange brown forewing and the pale hindwing with two marginal spots in the marginal band. It is most likely to be confused with Heliothis phloxiphaga. This species differs from H. zea in having dark gray spots on the costa at the transverse lines, dark filling of a large reniform spot, even brown shading distal to the median line on the forewing, and a large black hindwing discal spot. Heliocheilus paradoxus is also similar in color and pattern, although it is a smaller moth (FW length less than 15 mm). Males of this species can be identified easily by unique swollen veins on the anterior forewing. Females can be distinguished from H. zea by their size and in pattern by the postmedial line which is dark gray, thin, and strongly serrate like the pleats of an accordion bellows.

Larva is smooth and brown in color with yellow subdorsal bands and a wavy, undulating yellow lateral band.  It is illustrated by Powell & Opler (2009).

This species is common to abundant throughout most of North America in open, disturbed habitats.  It is a migratory species that is not a permanent resident of the Pacific Northwest, but spreads northward during the summer.  It is primarily a pest in disturbed agricultural lands and in urban areas at low elevations, but may breed extensively in high mountain meadows during particularly warm, dry summers.

This species is most common in low-elevation agricultural areas on both sides of the Cascades, particularly in the Columbia Basin in Washington, the Willamette Valley in western Oregon, and the Snake River Plain in southern Idaho. It is occasionally collected elsewhere as far north as southern British Columbia. This species probably arrives as a migrant from the south each year.

Helicoverpa zea is widely distributed in the New World from southern Canada to southern South America. It has also been introduced in Hawaii. In North America it is most common south of southern Canada.

This species is a generalist feeding on many kinds of herbaceous plants, and prefers feeding on fruits and seed heads.  It is highly destructive to many agricultural crops, particularly corn.

Helicoverpa zea has a long flight season and has been found during most of the year in many parts of its range. It is most common in late summer and fall in the Northwest, with most records from late July through October. It is nocturnal and comes to lights. The pheromone of this species is commercially available for use in agricultural traps.

This is a major agricultural pest on many crops, particularly corn.