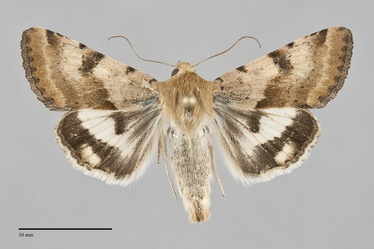 Heliothis phloxiphaga is a small to medium-sized moth (FW length 13 - 17 mm) that flies in most of our area throughout the summer. It has an orange-tinted, yellow-brown forewing with darker brown bands across the median and distal wing, and a cream hindwing with dark gray distal dot and marginal band with pale marginal spots. The forewing is shaped like an obtuse triangle with a long apex. It is ochre-yellow to pale red-brown, darker chestnut brown to gray-brown in the posterior median area distal to the median line and in the subterminal area. The terminal area is usually slightly lighter than the subterminal area, while the fringe is darker gray. The basal, antemedial, and postmedial lines are gray, thin except for thick dark spots on the costa at the latter two lines and small spots on the crossing veins. The postmedial line is strongly serrate with dark dots or lines on the tips of the teeth.  The median line is smooth and even, gray from the costa to the reniform spot and brown elsewhere, forming the medial edge of the dark area distal to it. The anterior portion from the costa to the lower reniform spot is oblique toward the outer margin, turning 90 degrees at the lower reniform spot toward the wing base, then straight to the trailing margin. The subterminal line is pale, even, similar to the wing base in color. Dark gray medial to the line forms triangle at the costa and, in some specimens, a dark line on the trailing margin. A series of dark gray to black spots forms the terminal line. The orbicular spot is faint to absent, outlined in brown or gray with filling of the ground color and a faint central ocellus. The reniform spot is weakly hourglass-shaped, has an incomplete outline of gray to black spots that is open toward the costa and trailing margin, and is filled with orange-brown peripherally and dark gray centrally. The claviform spot is absent. The hindwing is pale cream with variable dark gray suffusion at the base and on the veins. It is marked with dark gray large discal spot and a marginal band with one or two marginal cream two spots between M3 and CuA2. The fringe is tricolored with yellow to orange base, a gray median line, and a white edge. The head and thorax are slightly darker than the basal forewing. The male antenna is filiform.

This species resembles Helicoverpa zea, an abundant and widespread species in the Northwest, and Heliothis acesias, a rarer species found in eastern Oregon and southern Idaho. It can be distinguished from both by the brown shading distal to the median line on the lower half of the wing. The wing is more evenly mottled with gray or red-brown in H. zea and more uniform orange-brown in H. acesias. The latter species also differs in having light orange hindwing.

Larva is smooth and polymorphic in color including green, yellow, and brown morphs with mottled dorsal black spots and lines.

Heliothis phloxiphaga is found throughout most of the Pacific Northwest as far north as southern British Columbia. It is most common east of the Cascade and Coast Range crests, especially in low elevation basins. It is less widely distributed west of the mountains. It has been found most frequently near the Gulf of Georgia in northwestern Washington and adjacent British Columbia.

This species is widely distributed in North America from southern Canada to central Mexico.

This species is a generalist feeding on the flowers and seedheads of many kinds of herbaceous plants. It is sometimes a pest on agricultural crops. The larvae are common on the flowers of gumweed (Grindelia spp.) on beaches in northwestern Washington, even though the moth is collected uncommonly in the same area.

The flight season of H. phloxiphaga is long, lasting from April to October in our area. Most records are from the summer and early fall. This species is nocturnal and comes to lights. Occasional specimens fly during the day and visit flowers.

This species is an occasional pest on a variety of agricultural crops.