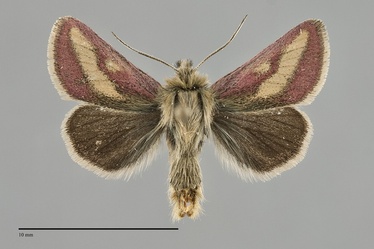 Heliolonche modicella is a very small (FW length 8 - 9 mm), attractive moth that flies in dry steppe in early summer. It has a dark ochre band on a wine-red background. The forewing is slightly pointed. The color is slightly powdery claret red, dark gray with a heavy sprinkling of ochre scales along the trailing margin from the base to the subterminal line. Two patches of uniform dark ochre yellow are present, a small one in the cell medial to the barely perceptible reniform spot and a large curved patch from the base near the posterior margin arcing lateral and anterior to end near the apex. The fringe is ochre with a gray base. The hindwing is uniform dark gray with a light yellow fringe. The head and thorax are uniform light yellow-gray, covered with hair-like scales. The eye is reduced in size. The male antenna is filiform.

This species has a distinctive pattern and is unlikely to be confused with other moths in our area. The most similar species, Heliolonche pictipennis, is limited to southern Idaho in our region and has a large pale patch on the terminal wing that is lacking in H. modicella, and usually has a pale base to the dorsal hindwing, also lacking in H. modicella.

This species appears to be very rare and sporadic on dry sagebrush steppe at low elevations east of the Cascades.

The range of this species includes most of California south or our region.

Hardwick (1996) cites mountain dandelion, Agoseris heterophylla (Asteraceae) as the foodplant of this species.

Adults are exclusively diurnal and visit flowers during the day. They have been collected in early June in Washington.