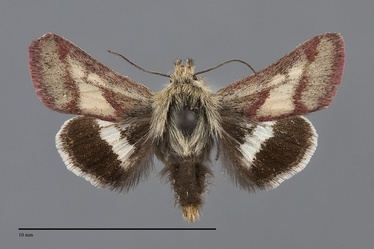 Heliolonche pictipennis is a very small (FW length 7 - 8 mm), red and light yellow moth that has been found in southern Idaho and flies in late spring. It has a black and white hindwing. The forewing edges and smooth antemedial and postmedial lines are dark rose pink to red, sprinkled with ochre scales. Red scales are often present on the cubital vein along the posterior cell. The median area is light yellow, while the base and distal wing are slightly darker light grayish ochre. The reniform spot is evident as a slightly darker area in the light yellow. No trace of the other lines or spots are evident. The fringe is dark pink. The hindwing is jet black, usually with a white band between black base and the position of the antemedial line. The hindwing fringe is dark basally and white distally. The head and thorax are uniform grayish yellow, the former covered in hair-like scales. The abdomen is black with pale scales on the distal segments and a patch of light gray-yellow scales on the tip. The eye size is reduced. The antenna is filiform.

This red and yellow forewing and black or black and white hindwing of this tiny species are diagnostic. The most similar species, Heliolonche modicella, has a dark red forewing with a curved band of ochre along the posterior and distal wing and a solid black hindwing.

The habitat of this species in Idaho is unknown. It is most likely associated with vernal meadows in dry steppe.

Heliolonche pictipennis has only been found in southern Idaho in our region.

This species is distributed through California and the Great Basin. It has been found in Arizona, Nevada, and Utah outside of the Northwest.

The life history is reported by Hardwick (1996). The larva feeds on Malacothrix glabrata and Rafinesquia carolus in the Asteraceae in California. The moths fly amongst the foodplant and rest on the flower. The moth is enclosed by the petals of Malacothrix when the flower closes in the afternoon.

Heliolonche pictipennis is exclusively diurnal. It flies in late spring and early summer. The Idaho record is from May.