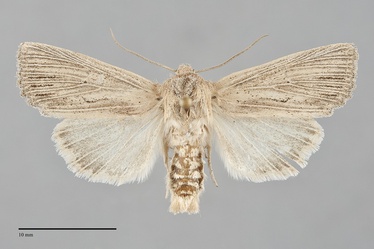 Benjaminiola colorada is a small to medium-sized moth (FW length 13–17 mm) that flies in desert wetlands during the fall. Its streaked, pale, tan forewing lacks other markings. The forewing apex is pointed, sometimes weakly hooked, and the outer margin is slightly scalloped posteriorly. The color is light tan with powdery light gray suffusion except in the cell, fold, and on the distal two-thirds of the trailing margin. The veins are pale whitish tan. A few specimens have black streaks between the distal veins on the mid-wing. The reniform spot is evident as a pale halo in some specimens, and a black dot is sometimes present at the posterior end of the cell. Other lines and spots are lacking. The hindwing is gray-tan off-white with a slight gray suffusion near the margin and a slightly lighter fringe. The head and thorax match the forewing color. The frons of the head is domed, about the size of the eye, with a slightly uneven surface. The male antenna is weakly beaded.

This species can be told from other fall-flying moths by the uniform, tan, streaked forewing with almost no other markings. Several moths in the tribe Leucaniini have predominantly streaked forewings and are similar in color, including Mythimna oxygala and Leucania farcta. These species have at least a few dark spots along the postmedial line and usually have a cubital vein that is distinctly lighter than the other veins. The hindwing of M. oxygala is also suffused with dark gray, unlike the pale wing of B. colorada.

This species is common and widely distributed in wetland habitats at low elevations east of the Cascades, including marshes and the riparian zone along creeks and rivers.

Benjaminiola colorada is found in the dry interior deserts of the Pacific Northwest as far north as northern Washington. It has only been collected in the extreme western and southeastern parts of Idaho, but might be more widespread in the dry interior part of that state.

The range of this species encompasses the West Coast. It is found to southern California south of our region.

No information is presently available regarding the larval biology of this species, but it probably bores into the stems of marsh grasses (Poaceae) and sedges (Cyperaceae) like related species.

This moth flies late in the season, predominantly in September with a few records from the end of August and beginning of October. It is nocturnal and comes to lights.