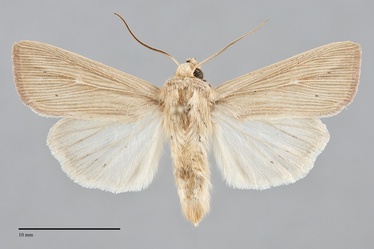 Leucania farcta is a very common, pale red-brown, medium-sized moth (FW length 14–19 mm) that flies throughout the Northwest from spring to fall. It has pale yellow-brown hindwings and its forewings have a cream-colored cubital vein and black spots along the course of the postmedial line. The forewing ground color is usually light reddish tan, paler yellow tan with a pink tinge in some populations from xeric environments. The color is slightly darker but not gray along the cubital vein from the base to the end of the cell and along the outer margin, greatest in a triangular area from the posterior end of the cell to the distal margin. The veins are cream-colored, palest on the cubital vein. Two pale lines run parallel to the veins in each interspace. Two black dots are present on the mid-wing along the postmedial line, one on vein M1 and the other on vein CuA2, smaller dots are variably present elsewhere on the postmedial line and on the antemedial line in some specimens. A small spot is present at the posterior end of the cell at the anterior cubital vein in some specimesn. A minority of specimens have very small spots at the terminal line. Other lines and all spots are obsolete. The fringe is the same color as the rest of the wing. The hindwing is slightly yellowish tan off-white with slightly darker gray veins and a thin reddish terminal line. The hindwing fringe is the same as the hindwing ground color. The head and thorax match the forewing ground color, with faint darker transverse barring on the collar. The eyes are covered with fine hairs. The male antenna is filiform.

This species resembles several other members of the tribe Leucaniini. It occurs with Mythimna oxygala, a common, slightly smaller species, but lacks the sooty dark suffusion on the dorsal hindwing of this species. It differs from all other Leucania species in having red forewing color, absence of gray darker areas along the posterior cubital vein, and a cream rather than white or darker gray hindwing. Leucania oregona flies with L. farcta along the Pacific Coast. In addition to the characters listed above it differs in having a postmedial line consisting of equal-sized spots and also has black spots on the hindwing terminal line.

This species exhibits geographic variation in the Northwest. The populations from west of the Cascade Mountains are much redder than those from further east.

Leucania farcta is widely distributed in the Northwest as far north as south-central British Columbia. It is found both on the east and west sides of the Cascade and Coast Ranges.

The range of L. farcta extends from the Rocky Mountains to the Pacific Ocean. The northern limit is southwestern Alberta and southern British Columbia. The range extends to the border with Mexico in Arizona and California.

This species is a climbing cutworm that feeds on seedheads of coarse grasses (Poaceae) such as orchard grass (Dactylis glomerata) and rye grasses (Elymus spp.)

The flight period of L. farcta extends from late spring to fall in the Northwest. The earliest records are from mid-May and the latest are from early October falling a peak in June and July. Where this species and L. oregona occur together L. farcta flies between spring and late summer broods of L. oregona. Leucania farcta is nocturnal and comes readily to lights.

This species is an agricultural pest in seed crops of rye grass and orchard grass in western Oregon.