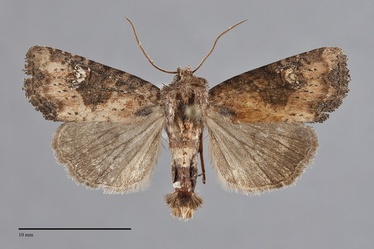 Mesapamea fractilinea is a small moth (FW length 12–13 mm) that flies in southern Idaho and southwestern Oregon during the summer. Its forewing color varies from yellow-brown to dark brown moth, rarely all dark. The reniform spot and the spots along the veins have speckled white filling. The forewing has a straight outer margin that is oriented perpendicular to the wing axis anterior to a bend a short distance above the anal angle. The most common ground color ranges from ochre-tan to slightly orange-tan, with darker orange-brown to red-brown mottling in the antemedial area and as a patchy shade preceding the subterminal line on the posterior two-thirds of the wing. The costa is much darker mottled gray-brown and warm brown from the base to the subterminal line, leaving the apex the ground color. This dark color covers the anterior half of the wing base, most of the median area to the fold, and only the costa in the subterminal area. The terminal area and fringe are are similar to darker gray, also mottled. Entirely mottled dark brown specimens in which the dark areas on the costa and before the subterminal line in the subterminal area and dark gray in the terminal area remain visible are not infrequent in the east but have not been found here, although only a few specimens have been examined. The basal, antemedial, and postmedial lines are gray, double with filling of the adjacent wing color or slightly lighter shade in some dark specimens. Many lighter bicolored specimens have the lines reduced to paired spots on the veins on the light portion of the wings, especially prominent at the postmedial line. The antemedial line is slightly laterally convex and strongly angled toward the outer margin. The postmedial line is drawn toward the base on the costa, is nearly straight at a right angle to the wing lateral to the reniform spot, and is curved to meet the posterior margin at a right angle below the spot. The subterminal line is ochre in light specimens and a lighter shade of the dark ground color in dark ones, faint, slightly irregular. The terminal line consists of small dark spots. The fringe is dark brown with a basal series of small ochre spots in light specimens. The spots are outlined in dark brown-gray. The inconspicuous orbicular spot is nearly round and filled with ochre and a dark central ocellus in light specimens and filled with a dark ground color in dark specimens. The reniform spot is rectangular with an irregular outer margin, partially filled with white and/or pale luteous scales that are most consistent along the lateral border and interrupted by a few dark spots. The claviform spot is small. The hindwing is medium-dark tan-gray with faintly darker gray discal spot, veins, and terminal line. The distal hindwing fringe is slightly lighter. The head and thorax are variable brown with a black transverse line near the edge of the collar. The male antenna is filiform.

The light bicolored form of this moth can be identified by the dark anterior wing color, the dotted lines, and the broken white filling of the reniform spot. Lateroligia ophiogramma is similarly colored, but differs in many details of the pattern including a white patch adjacent to a black claviform spot and a complex black and dark blue-gray spot near the anal angle that are lacking in M. fractilinea. The dark form of M. fractilinea can be identified by its small size and the white or light yellow spots in the reniform spot. It resembles Oligia tusa, but these species are unlikely to be taken together because O. tusa is restricted to habitats near the Pacific Coast.

This species is common and widely distributed throughout eastern North America, extending westward to the Rocky Mountains in moist grassland habitats.

Mesapamea fractilinea is restricted to the eastern part of the Pacific Northwest. It has been found in the Snake River Plain of southern Idaho and in western Montana.

This species is found predominantly in the eastern and central portions of North America as far north as Maine, southern Ontario, and south-central Alberta. The southern limits are Florida and the southern Southwest from California to New Mexico. It occurs in Wyoming, Colorado, and Utah in the central Rocky Mountain region.

This species bores into the stems of grasses (Poaceae), and can be a pest in corn crops.

The adults fly during the summer from mid-July to mid-August. It is a nocturnal species that comes to lights.

This species is sometimes a pest of corn crops in eastern North America.