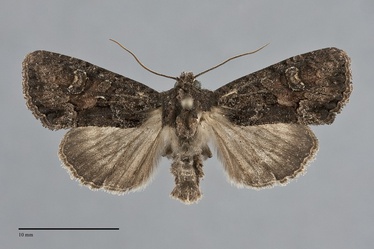 Oligia tusa is a small to medium-sized, dusky, dark gray and red-brown moth (FW length 14–16 mm) that flies near the Pacific Ocean during the summer. It has an incomplete gray outline of the reniform spot. The outer margin of the forewing is scalloped. It is mottled blackish gray and wine red, darkest gray on the posterior wing from the base to the postmedial line and in the terminal area, save for the apex. A dark spot in the fold in the subterminal blends with the dark terminal area to produce a blackish triangle above the anal angle. A black dash-like mark is present near the posterior margin medial to the antemedial line. The lines are dark brown and black, partially double filled with the dark claret color. The basal line is limited to near the costa. The antemedial line is strongly arched toward the outer margin, apex of the curved at the claviform spot. The median line is dark gray, evident near the medial reniform spot and adjacent to the distal postmedial line. The postmedial line is black from the fold to the trailing margin and gray elsewhere, lightly scalloped, smoothly excurved around the cell with the apex of the curve close to the costa, then smoothly bent to meet the trailing margin at a right angle below the reniform spot. Small light spots are present on the veins adjacent to this line in some specimens. The subterminal line is pale claret, weak and interrupted, irregular. It is preceded by a gray shade that is similar to the adjacent terminal area, widest and darkest in the fold to produce the triangular mark described above. The terminal line is a series of black spots. The fringe is dark gray with lighter basal spots at the ends of the veins. The orbicular spot is dark gray filled with gray peripherally and the ground centrally, inconspicuous. The reniform spot is a broad kidney-shape, tilted with the anterior end closest to the base, filled with luteous tan and light gray spots that are most prominent along the lateral aspect. The claviform spot is black, small. The hindwing is gray-tan with diffuse darker gray discal spot, postmedial line, and marginal band, and a thin dark terminal line. The fringe is light gray with a striped luteous and gray base. The head and thorax are smoky dark reddish gray, with a faint stripe across the distal collar and darker central tegulae. Paired tufts are present on the anterior thorax. The male antenna is filiform.

This species can be recognized by its very dark wine-red and blackish gray color with a pale gray and luteous spots in the reniform spot and a triangular black mark near the anal angle. It should only be expected in the western portion of the region near the Pacific Coast. Dark specimens of Mesapamea fractilinea are similar although slightly smaller and brown rather than dark red. This species is very rarely collected in the Northwest and has only been taken inland in southwestern Oregon near the range of O. tusa. Oligia divesta is a common species in much of the Pacific Northwest. It is gray and red-brown, although lighter than O. tusa, and differs in having a black median dash and a white mark at the distal postmedial line. Dryotype opina is similar in size and general appearance to O. tusa and flies along the Coast during the fall. It is browner with a more distinct pattern on the distal wing, has a much lighter hindwing with distinct lines, and males have a wide bipectinate antenna that is clearly different than that of O. tusa even to the naked eye.

This species is very narrowly endemic to coastal marshes and wetlands at the edge of the Pacific Ocean.  It appears to be moderately common in this restricted habitat.

Oligia tusa is found along the Pacific shore as far north as the Gulf of Georgia in southwestern British Columbia. It is also known from further inland in the Willamette Valley of Oregon.

The range extends south in coastal California to the border with Mexico.

No information is presently available regarding the larval biology of this species, but it probably bores into the stems of sedges (Carex spp.) in the Cyperaceae or rushes (Juncus spp.) in the Juncaceae based upon closely related species.

Adults fly during the summer, usually from mid-June until mid-August. They are nocturnal and come to lights.