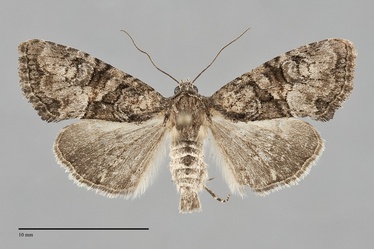 Neoligia invenusta is a common small moth (FW length 10–11 mm) that flies in and near forests throughout the Northwest during the summer. It has a mottled, olive-gray or brownish gray forewing that is usually dark blackish-brown medial to the reniform spot. The entire wing is mottled. The ground color is medium-dark gray with a warm olive or brown tint. The wing basal to the reniform spot and posterior postmedial line is typically brown-black, sometimes with a slight reddish tint or nearly as light gray as the distal wing. The distal subterminal area is brown or dark gray, and terminal area are dark gray to black. Some specimens have an even nearly white subterminal area except on the costa, often with dark veins across it. A black median dash is usually present although often inconspicuous due to the adjacent dark wing color. The transverse lines are dark gray, double with filling of the ground color except lighter gray in the posterior postmedial line. When not obscured by the dark adjacent color the antemedial line is strongly arched toward the outer margin, apex at the fold. The basal and antemedial lines are gray, double, only clearly seen in specimens with lighter adjacent color, finely undulating and arched toward the lateral margin. The median line is dark gray or black, evident near the reniform spot. The postmedial line is lightly scalloped, faint around the reniform spot and darker and evenly concave toward the base below the spot. The subterminal line is gray or light tan, sinuous, focally drawn toward the base on M2 and in the fold. The fringe is dark gray, sometimes checkered with dark brown. The orbicular spot is round, usually filled with light gray, sometimes the dark adjacent color. The reniform spot is moderate-sized, outlined by a double gray line and filled with gray or whitish gray. The claviform spot is black, small. The hindwing is light to dark gray, darker toward the margin, with a dark thin terminal line. The hindwing fringe is two-toned gray. The head and thorax are dark gray to brown-black with a black transverse line across the distal collar and a brown patch on the posterior thorax. The male antenna is filiform.

This species can usually be identified by its small size—although relatively large within the genus Neoligia—and mottled brown-gray or olive-gray forewing with a dark medial half. Specimens in which the subterminal area is whitish are especially distinctive. Other than Neoligia subjuncta, which has a light olive-gray forewing color (but with other distinguishing features), N. invenusta is the only species in which the gray color has a warm tint rather than being ash-gray or steel-gray. Almost all Neoligia specimens from west of the Cascades are this species, although this is not certain in southwestern Oregon. Definitive identification of Neoligia specimens is best confirmed by examination of the genitalia, performed relatively easily in males by removing the scales from the tip of the abdomen with a small brush. The cucullus of N. invenusta is rounded rather than truncate ("squared-off") as in several of our other species, and the ventral process is long and relatively thick at the base. If dissected, the vesica bears a single very long spine that is nearly as long as the aedeagus. Differences between the females is only evident after dissection as described by Troubridge & Lafontaine (2002).

The type locality of Neoligia invenusta Troubridge and Lafontaine is Canada, British Columbia, Mt. Kobau. This species is not as unattractive as the species name suggests (invenusta means "not beautiful").

This species occurs in a variety of habitats but is most common in open conifer forests on both sides of the Cascades. It is usually found at low to middle elevations.

Neoligia invenusta occurs in forests throughout much of the Pacific Northwest as far north as south-central British Columbia. It is found on both sides of the Cascades, and is largely absent from the driest parts of the Columbia Basin and the southern parts of Oregon and Idaho. It has been found on mountains in the Basin and Range region, including on Steens Mountain in southeastern Oregon. This is the most common Neoligia species west of the Cascades.

The range of this species extends south through California and the Intermountain West, including Utah, Nevada, and Arizona.

The flight season of N. invenusta is relatively long, beginning in mid-June and lasting until mid-September. It is nocturnal and comes to lights.